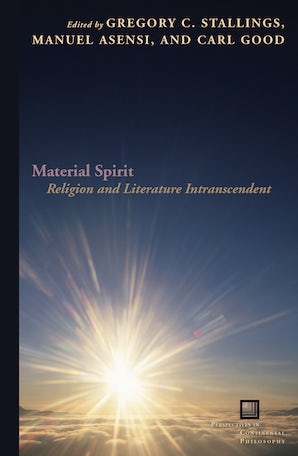 The essays in this collection examine philosophical, religious, and literary or artistic texts using methodologies and insights that have grown out of reflection on literature and art. In them, them phrase “material spirit” becomes a point of departure for considering the continuing spectral effects of religious texts and concerns in ways that do not simply call for, or assume, new orrenewed forms of religiosity.

The writers in this collection seek to examine religion beyond traditional notions of transcendence: Their topics range from early Christian religious practices to global climate change. Some of the essays explore religious themes or tones in literary texts, for example, works by Wordsworth, Hopkins, Proust, Woolf, and Teresa of Avila. Others approach—in a literarycritical
mood—philosophical or para-philosophical writers such as Bataille, Husserl, Derrida, and Benjamin. Still others treat writers of a more explicitly religious orientation, such as Augustine, Rosenzweig, or Bernard of Clairvaux.

Material Spirit will be a stimulating read for anyone who takes immanence seriously in, and especially across, philosophical, religious, literary, and cultural registers. Rather than rehearsing well-worn arguments or rehashing old debates, the contributors innovatively interpret the titular phrase, combining disciplines, methods, texts, and topics as seemingly unlikely, but as ultimately provocative, as the phrase 'material spirit.'---—William Robert, Syracuse University

The contributions to Material Spirit are original, compelling, and beautifully interwoven. Together, they carve out a space that is neither religious nor not-religious, avoiding the dangers of unreconstructed immanence on the one hand and escapist transcendence on the other.---—Mary-Jane Rubenstein, Wesleyan University