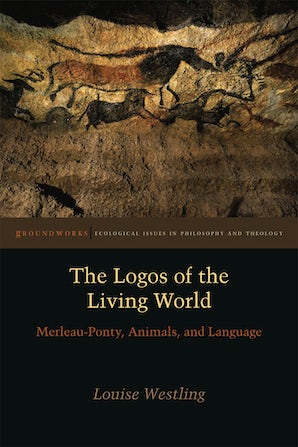 The Logos of the Living World

Today we urgently need to reevaluate the human place in the world in relation to other animals. This book puts Maurice Merleau-Ponty’s philosophy into dialogue with literature, evolutionary biology, and animal studies. In a radical departure from most critical animal studies, it argues for evolutionary continuity between human cultural and linguistic behaviors and the semiotic activities of other animals.

In his late work, Derrida complained of philosophers who denied that animals possessed such faculties, but he never investigated the wealth of scientific studies of actual animal behavior. Most animal studies theorists still fail to do this. Yet more than fifty years ago, Merleau-Ponty carefully examined the philosophical consequences of scientific animal studies, with profound implications for human language and culture. For him, “animality is the logos of the sensible world: an incorporated meaning.” Human being is inseparable from animality.

This book differs from other studies of Merleau-Ponty by emphasizing his lifelong attention to science. It shows how his attention to evolutionary biology and ethology anticipated recent studies of animal cognition, culture, and communication.

We are in the midst of a profound change, affecting both science and philosophy, in our ways of understanding the natural and cultural worlds. Louise Westling’s important new book The Logos of the Living World shows us a part of the intertwining history of that change as it emerges not only in the natural history of our mythic life but also in the scientifically-informed work of the French philosopher Maurice Merleau-Ponty. What may appear retrospectively as Kuhnian “paradigm shifts” in the history of knowledge always have also an often semi-hidden history of continuities. Westling shows how those continuities appearing in the phenomenology of Merleau-Ponty are an important part of the path of inquiry which leads also to an understanding of the intelligence of the living world which finds its scientific expression in the development of biosemiotics. The Logos of the Living World is essential reading for all those interested in the science and philosophy which will emerge from the wreckage of the dominant but exhausted assumptions of Western modernity. - —Wendy Wheeler, author of The Whole Creature: Complexity, Biosemiotics, and the Evolution of Culture

“The Logos of the Living World provides an innovative and intriguing application of Merleau-Ponty’s thought to the question of how animals and humans can inhabit the same planet, while displaying diverse forms of communication.” - —Environmental Ethics

A central thesis of Louise Westling's highly accomplished and provocative 'The Logos of the Living World: Merleau-Ponty, Animals, and Language' is that 'human language and aesthetic behaviors emerge from our animality.' What is perhaps most compelling about her thesis is that she supports it by exploring how an evolutionary continuity between an always already languaged world and human being-in-the-world can be understood without having to employ dangerous (il) logic of social Darwinism or some schools of evolutionary psychology and without having to serve as yet another iteration of a naive 'metaphysical of presence'. - —Biosemiotics

A luminous and wide-ranging inquiry into biosemiotic expression as the distinguishing mark of cross-species affinity, informed by a searching interpretation of the phenomenology of Merleau-Ponty as a model for conceiving that affinity. At both levels, The Logos of the Living World delivers significant fresh insights potentially of great significance for the future of ecocritcism. - —Lawrence Buell, Harvard University

An outstanding characteristic of Westling's text is its spotlight on Merleau-Ponty's lifelong engagement with the advanced sciences of his day and his anticipation of current discussions relevant to animal and literary studies. - Chris Wilbert, —Radical Philosophy

Louise Westling's groundbreaking study reevaluates French philosopher Maurice Merleau-Ponty's writings on the basis of his myriad contributions to ecocriticism, animal studies, and biosemiotics, and reveals that he anticipated debates that continue to mark the environmental humanities. - —Studies in 20th & 21st Century Literature

“For the first time, I believe, this book supplies the proper larger context of interdisciplinary work where Merleau-Ponty’s insights take on their full meaning.” - —Glen Mazis, Pennsylvania State University