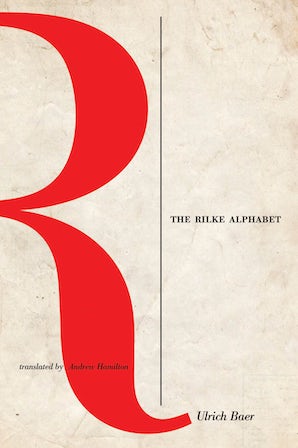 The enduring power of Rainer Maria Rilke’s poetry rests with his claim that all we need for a better life on earth is already given to us, in the here and now. In twenty-six engaging and accessible essays, Ulrich Baer’s The Rilke Alphabet examines this promise by one of the greatest poets in any tradition that even the smallest
overlooked word may unlock life’s mysteries to us.

Fueled by an unebbing passion and indeed love for Rilke’s poetry, Baer examines twenty-six words that are not only unexpected but also problematic, controversial, and even scandalous in Rilke’s work. In twenty-six mesmerizing essays that eschew jargon and teutonic learnedness for the pleasures and risks of unflinchingly engaging with a great artist’s genius, Baer sheds new light on Rilke’s politics, his creative process, and his deepest and enduring thoughts about life, art, politics, sexuality, love, and death.

The Rilke Alphabet shows how Rilke’s work provides an uncannily apt guide to life even in our vexingly postmodern condition. Whether it is a love letter to frogs, a problematic brief infatuation with Mussolini, a sustained reflection on the Buddha, the evasion of the influence of powerful precursors, or the unambiguous assertion that freedom must be lived in order to be known, Rilke’s writings pull us deeply into life.

Baer’s decades-long engagement with Rilke as a scholar, translator, and editor of Rilke’s writings allows him to reveal unique aspects of Rilke’s work. The Rilke Alphabet will surprise and delight Rilke fans, intrigue newcomers to his work, and deepen every reader’s sense of the power of poetry to penetrate the mysteries and confusions of our world.

Ulrich Baer has given us a serious jeu d’esprit with rich results: assured entry, after so many have tried without success, into Rilke’s intellectual and poetic world. Baer’s primer, in both senses of the word, is a triumph of the Horatian ideal: a work full of wit and study, pleasure and instruction. It will make every reader strive to fill in the virtual letters between the letters of Baer’s alphabet as doors to open into Rilke.---—Stanley Corngold, Princeton University

This book is a cornucopia with presents for the reader, one hardly knows which one to open first. It is an inspiring and rich book that draws its readers in from many surprising sides. Each essay stands on its own, offering a fresh perspective on the life and thought of one of the most celebrated German poets of the twentieth century. And yet the whole is greater than the sum of its parts: a rich portrait of Rilke that enlivens his legacy for a new generation.---—Fritz Breithaupt, Indiana University

In 'The Rilke Alphabet', which appeared in German in 2006, Baer foes where few Rilke enthusiasts have gone before, tracking echoes of Rilke's difficulties with autoeroticism into the poetry itself. . .Baer this makes good on his promise to 'disturb' our sense of Rilke. . .[equally] instead of pressing to show that Rilke was either a great poet, and basically a good person, or an artist whose work in comprised by his bigotry and political wrong-headedness, Baer provocatively, but also subtly, opens up the discussion. - —Time Literary Supplement

Composed as a series of provocative and richly unfolding essays, Ulrich Baer’s abecedarium occasions fresh encounters with Rilke’s œuvre, not by paving an exit toward transcendent meaning, but rather, on the contrary, by marking crucial words as points of recalcitrance, which ensure that the reader never abandons an immanent, adventurous, and often surprising engagement with the texts.---—John T. Hamilton, Harvard University

Ulrich Baer’s The Rilke Alphabet consists of twenty-six free standing essays, each one sending a sort of mine shaft into the densely layered strata of Rilke’s poetry, prose, and letters. Each shaft hits a mother lode of rich, surprising, and at times disturbing insight not only into the poet’s work and life but also into the cultural history in which they were embedded. The essays, organized by way of an idiosyncratic alphabetization of concepts, names, topics are partial in the best sense: intensely focused on particular points of access into the poet’s work and life; infused with partiality, a passionate attachment to that “partial object” that is Rilke’s singular voice.---—Eric Santner, University of Chicago

I know of no more sophisticated attempt to connect the life and work of Rilke for today's readers. Baer makes himself the champion of the poet's own insights, upholding them against Rilke's detractors, enthusiasts, and scholarly interpreters alike. Don't let the quirky format or the nose-thumbing fool you: this is a work of bracing purpose, which everyone who thinks they know Rilke should read. Again and again Baer frees Rilke from our ideas about him and gives him back to us afresh.---—William Waters, Boston University

Reading Baer’s elegant prose is a rare pleasure. Baer’s brilliant book The Rilke Alphabet captures the genius of the modern poet and Rilke’s intelligence as a witness of modernity—by employing a dazzling device. Baer presents us twenty-six viewpoints on Rilke’s work, twenty-six perspectives that are vital for anyone who is interested in the poet’s work and in modernism as such. It reads as a real page turner.---—Amir Eshel, Stanford University