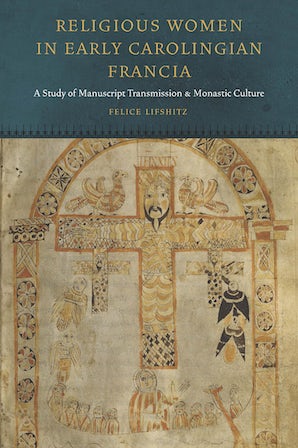 A Study of Manuscript Transmission and Monastic Culture

Religious Women in Early Carolingian Francia, a groundbreaking study of the intellectual and monastic culture of the Main Valley during the eighth century, looks closely at a group of manuscripts associated with some of the best-known personalities of the European Middle Ages, including Boniface of Mainz and his “beloved,”abbess Leoba of Tauberbischofsheim. This is the first study of these “Anglo-Saxon missionaries to Germany” to delve into the details of their lives by studying the manuscripts that were produced in their scriptoria and used in their communities. The author explores how one group of religious women helped to shape the culture of medieval Europe through the texts they wrote and copied, as well as through their editorial interventions.
Using compelling manuscript evidence, she argues that the content of the women’s books was overwhelmingly gender-egalitarian and frequently feminist (i.e., resistant to patriarchal ideas). This intriguing book provides unprecedented glimpses into the “feminist consciousness” of the women’s and mixed-sex communities that flourished in the early Middle Ages.

Lifshitz’s endeavor to map a cultural and intellectual world and explore a collective
identity on the basis of a limited—yet unique—set of sources not only forms an important contribution to feminist scholarship but also creates a model for other manuscript-based explorations of collective identities. This is a splendid book.

Once again, Felice Lifshitz has emerged from the archives with set of neglected texts --this time, documents from the English monasteries of Leoba and Boniface in Germany--and applies her usual fierce scrutiny to the manuscripts in order to show the rest of us what we have missed, misconstrued, and misinterpreted about early medieval history, gender, and religion. This book offers a model method for graduate students and a reminder to all medievalists that the sometimes onerous analysis of manuscripts still has much to tell us about such well-known topics as the Christianization of Germany as well as such seemingly modern issues as gender equity and women's intellectual agency.---—Lisa Bitel, University of Southern California

This book is indispensable for any scholar of eighth-century Francia, early medieval textual transmission, or gender studies in the Middle Ages. - Early Medieval Europe

Lifshitz has written an interesting book in which she presents new perspectives and scenarios on an ongoing debate. - —TMR: The Medieval Review

In this pathbreaking book, Felice Lifshitz gives us a magisterial reexamination of the place of women in the early medieval Chritianity. Through an innovative and convincing analysis of a range of manuscripts produced by and for Frankish religious women, she shows us how the Christian culture and intellectual life of the eighth century were gender-egalitarian and even ‘feminist’ in the sense of a resistance to patriarchal ideas. An exciting book for medievalists, but also for anyone interested in the history of gender relations over the centuries.---—Anne-Marie Helvetius, Professor of Medieval History, University of Paris VIII–Vincennes–Saint-Denis.