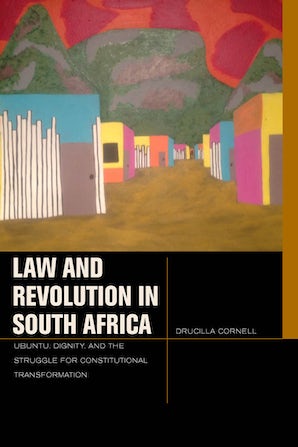 The relation between law and revolution is one of the most pressing questions of our time. As one country after another has faced the challenge that comes with the revolutionary overthrow of past dictatorships, how one reconstructs a new government is a burning issue.

South Africa, after a long and bloody armed struggle and a series of militant uprisings, negotiated a settlement for a new government and remains an important example of what a substantive revolution might look like. The essays collected in this book address both the broader question of law and revolution and some of the specific issues of transformation in South Africa.

Partly focusing on South Africa as a case study, Cornell considers the challenge of reconstructing a government after the revolutionary overthrow of past dictatorships. - — Law & Social Inquiry, Journal of the American Bar Foundation

“This book is a rare one–the reflections on philosophy, law, and political theory are profound and moving. Rather than reproduce the multiple stages of debate surrounding transitional justice – reconciliation vs. forgiveness, memory vs. forgetting– the author shifts the question toward what she calls ‘substantive revolution.’ This marks an advance in discussions of reconciliation and political life after massive, sustained spasms of violence. When one adds to that a significant dose of philosophy and critical theory – from Heidegger through contemporary political philosophers – the book takes on a new thread in theorizing transition and gives it real complexity. Substantive revolution is deepened by critical theory, critical theory is deepened by engagement with the concrete work of substantive revolution.”---—John Drabinski, Amherst College

“Law & Revolution in South Africa continues Drucilla Cornell’s path breaking work on indigenous law formation in post-apartheid South Africa. The essays collected here add to her evolving approach to fundamental ideas of law, politics, and ethics as informing uBuntu, living customary law, and dignity jurisprudence in South Africa. This book bears directly on the vibrant ongoing debate in South Africa about how to restore societal respect for law in light of its gross misappropriation during the many decades of abuse by colonialist and racist control of the country and the accompanying gruesome suppression of the native population. This is a fascinating debate that should be of interest to all those concerned with achieving legitimacy for the institutions and procedures of legality following a transition to constitutional democracy, and especially the extent to which values embedded in customary legal traditions can be used by courts in wrestling with sensitive legal disputes from morally reconstructive perspectives.”---—Richard Falk, Princeton University