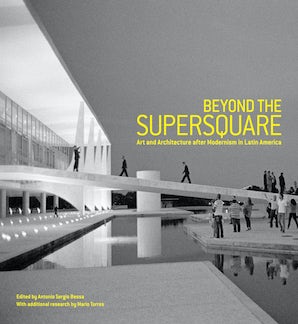 Art and Architecture in Latin America after Modernism

Beyond the Supersquare: Art and Architecture in Latin America after Modernism, which developed from a symposium presented by the Bronx Museum of the Arts in 2011, showcases original essays by distinguished Latin American architects, historians, and curators whose research examines architecture and urban design
practices in the region during a significant period of the twentieth century. Drawing from the exuberant architectural projects of the 1940s to the 1960s, as well as from critically engaged artistic practices of the present day, the essays in this collection reveal how the heroic visions and utopian ideals popular in architectural discourse during the modernist era bore complicated legacies for Latin America—the consequences of which are evident in the vastly uneven economic conditions and socially disparate societies found throughout the region today.

The innovative contributions in this volume address how the modernist movement came into being in Latin America and compellingly explore how it continues to resonate in today’s cultural discourse. Beyond the Supersquare takes themes traditionally examined within the strict field of urbanism and architecture and explores them against a broader range of disciplines, including the global economy, political science, gender, visual arts, philosophy, and urban planning.

Containing a breadth of scholarship, this book offers a compelling and distinctive view of contemporary life in Latin America. Among the topics explored are the circulation of national cultural identities through architectural media, the intersection of contemporary art and urban social politics, and the recovery of canonically overlooked figures in art and architectural histories, such as Lina Bo Bardi and Joao Filgueiras Lima (“Lele”) from Brazil, Juan Legarreta of Mexico, and Henry Klumb in Puerto Rico.

Edited: Antonio Sergio Bessa
Antonio Sergio Bessa holds a Ph.D. from the Steinhardt School of Education, New York University. For sixteen years he worked as the Director of Curatorial and Education Programs at The Bronx Museum of the Arts, in addition to teaching at the School of Visual Arts and Columbia University’s Teachers College. A scholar of concrete poetry, Bessa is the author of Öyvind Fahlström—The Art of Writing, co-editor of Novas—Selected Writings of Haroldo de Campos, and editor of Mary Ellen Solt—Towards a Theory of Concrete Poetry and Paulo Bruscky: Poesia Viva.