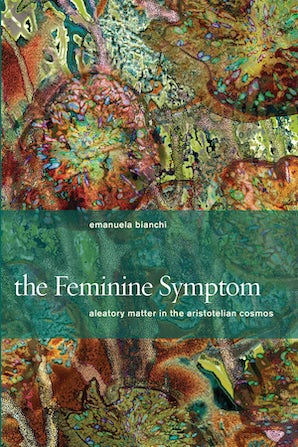 The first English-language study of Aristotle’s natural philosophy from a continental perspective, the Feminine Symptom takes as its starting point the problem of female offspring. If form is transmitted by the male and the female provides only matter, how is a female child produced? Aristotle answers that there must be some fault or misstep in the process.

This inexplicable but necessary coincidence—sumptoma in Greek—defines the feminine symptom. Departing from the standard associations of male-activity-form and female-passivity-matter, Bianchi traces the operation of chance and spontaneity throughout Aristotle’s biology, physics, cosmology, and metaphysics and argues that it is not passive but aleatory matter— unpredictable, ungovernable, and acting against nature and teleology—that he continually allies with the feminine.

Aristotle’s pervasive disparagement of the female as a mild form of monstrosity thus works to shore up his polemic against the aleatory and to consolidate patriarchal teleology in the face of atomism and Empedocleanism.

Bianchi concludes by connecting her analysis to recent biological and materialist political thinking, and makes the case for a new, antiessentialist politics of aleatory feminism.

"The Feminine Symptom: Aleatory Matter in the Aristotelian Cosmos is the first book-length feminist study to undertake a deconstructionist and psychoanalytic reading of Aristotle's cosmology. This approach is fruitful; in contrast to most of the feminist commentaries on Aristotle, which are critiques of his overt misogyny, Emanuela Bianchi elaborates an original and important argument that posits the feminine symptom as an aleatory force of becoming that exceeds the conceptualization of teleology at the heart of Aristotle’s project. This book will be of interest to feminist scholars, philosophers and theorists engaged in the effort to think the new, in the effort to think the event.”---—Rebecca Hill, RMIT University, Melbourne

Showing the absolute centrality of sexual difference to all of his work, Bianchi also reveals the disruptive, inassimilable and excessive presence of the feminine in Aristotle. The female offspring in Aristotle’s biology is a symptom of a philosophical dilemma, sign of the aleatory nature of matter disturbing the telos, the final cause. Juxtaposing the systematic and phenomenological, and emphasizing Aristotle’s paradoxical commitment to both, Bianchi resists both blame and repair, and through the performance of a 'critical intimacy' with the immense Aristotelian corpus she offers a brilliant and fresh reading of this original and formidable thinker of the Western tradition. Drawing in voices from Plato to Pussy Riot, Bianchi illuminates the potential for a new politics of aleatory feminism in the present.---—Page DuBois, University of San Diego

Deftly deploying the strategies of deconstruction, Bianchi illuminates the dynamism of the feminine symptom agitating Aristotle’s thought from within. In a series of rigorous readings spanning the entire Aristotelian corpus, Bianchi evidences aspects of the ancient thinker consonant with contemporary discourses ranging from Althusser, Deleuze, and Heidegger to psychoanalysis and feminist thinking. This tour de force prepares the concluding remarks in the Marxian vein and renders Aristotle an unsurpassed source of political insight.---—Claudia Baracchi, Università di Milano-Bicocca