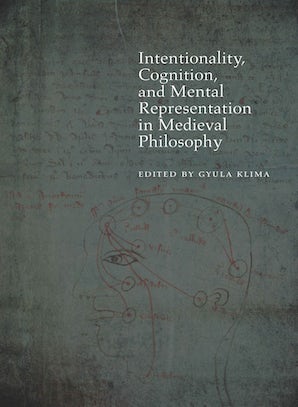 It is commonly supposed that certain elements of medieval philosophy are uncharacteristically preserved in modern philosophical thought through the idea that mental phenomena are distinguished from physical phenomena by their intentionality, their intrinsic directedness toward some object. The many exceptions to this presumption, however, threaten its viability.

This volume explores the intricacies and varieties of the conceptual relationships medieval thinkers developed among intentionality, cognition, and mental representation. Ranging from Aquinas, Scotus, Ockham, and Buridan through less-familiar writers, the collection sheds new light on the various strands that run between medieval and modern thought and bring us to a number of fundamental questions in the philosophy of mind as it is conceived today.

This constitutes a very significant collection of essays on medieval theories of cognition and philosophical psychology. - —Richard Cross, University of Notre Dame

While the volume is undoubtedly directed primarily to medieval specialists familiar with the figures under study, the essays are written with an eye to accessibility...the contents are of a very high caliber and constitute a major contribution to a vibrant field. - —Carl N. Still, Journal of the History of Philosophy, 54.2

Gyula Klima is professor of philosophy at Fordham University, Doctor of the Hungarian
Academy of Sciences, director of the Society for Medieval Logic and Metaphysics, and
editor of the society’s proceedings. Among his books is John Buridan (2008).