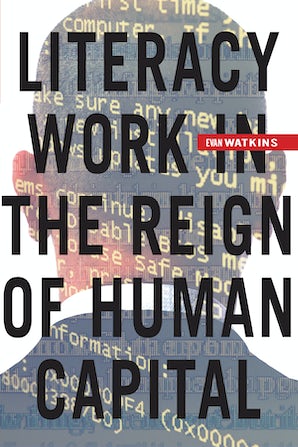 Literacy Work in the Reign of Human Capital

In recent years, a number of books in the field of literacy research have addressed the experiences of literacy users or the multiple processes of learning literacy skills in a rapidly changing technological environment. In contrast to these studies, this book addresses the subjects of literacy. In other words, it is about how literacy workers are subjected to the relations between new forms of labor and the concept of human capital as a dominant economic structure in the United States. It is about how literacies become forms of value producing labor in everyday life both within and beyond the workplace itself.

As Evan Watkins shows, apprehending the meaning of literacy work requires an understanding of how literacies have changed in relation to not only technology but also to labor, capital, and economics. The emergence of new literacies has produced considerable debate over basic definitions as well as the complexities of gain and loss. At the same time, the visibility of these debates between advocates of old versus new literacies has obscured the development of more fundamental changes. Most significantly, Watkins argues, it is no longer possible to represent human capital solely as the kind of long-term resource that Gary Becker and other neoclassical economists have defined. Like corporate inventory and business management practices, human capital—labor—now also appears in a “just-in-time” form, as if a power of action on the occasion rather than a capital asset in reserve.

Just-in-time human capital valorizes the expansion of choice, but it depends absolutely on the invisible literacy work consigned to the peripheries of concentrated human capital. In an economy wherein peoples’ attention begins to eclipse information as a primary commodity, a small number of choices appear with an immensely magnified intensity while most others disappear entirely. As Literacy Work in the Reign of Human Capital deftly illustrates, the concentration of human labor in the digital age reinforces and extends a class division of winners on the inside of technological innovation and losers everywhere else.

Everyone, these days, seems to be an advocate of more and better schools in order to create a more literate workforce. Watkins effectively demonstrates that’s simply not enough—not if we think seriously about literacies and the role they play in reproducing the kinds of economic and social inequalities that have emerged over the course of the past three decades.---—David Ruccio, Professor of Economics, University of Notre Dame

Everyone, these days, seems to be an advocate of more and better schools in order to create a more literate workforce. Watkins effectively demonstrates that’s simply not enough—not if we think seriously about literacies and the role they play in reproducing the kinds of economic and social inequalities that have emerged over the course of the past three decades. - —David Ruccio, Professor of Economics, University of Notre Dame

By (author) Evan Watkins
Evan Watkins is Professor of English at the University of California, Davis. He is the author of Class Degrees: Smart Work, Managed Choice, and the Transformation of Higher Education (Fordham); Everyday Exchanges: Marketwork and Capitalist Common Sense; Throwaways: Work Culture and Consumer Education; and Work Time: English Departments and the Circulation of Cultural Value.