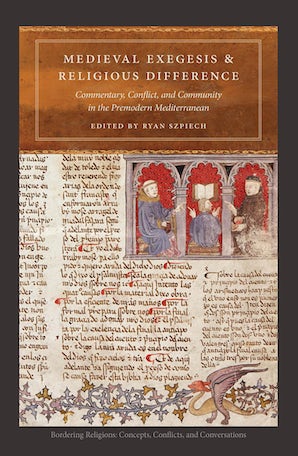 Commentary, Conflict, and Community in the Premodern Mediterranean

Jews, Christians, and Muslims all have a common belief in the sanctity of a core holy scripture, and commentary on scripture (exegesis) was at the heart of all three traditions in the Middle Ages. At the same time, because it dealt with issues such as the nature of the canon, the limits of acceptable interpretation, and the meaning of salvation history from the perspective of faith, exegesis was elaborated in the Middle Ages along the faultlines of interconfessional disputation and polemical conflict. This collection of thirteen essays by world-renowned scholars of Judaism, Christianity, and Islam explores the nature of exegesis during the High and especially the Late Middle Ages as a discourse of cross-cultural and interreligious conflict, paying particular attention to the commentaries of scholars in the western and southern Mediterranean from Iberia and Italy to Morocco and Egypt.

Unlike other comparative studies of religion, this collection is not a chronological history or an encyclopedic guide. Instead, it presents essays in four conceptual clusters (“Writing on the Borders of Islam,” “Jewish-Christian Conflict,” “The Intellectual Activity of the Dominican Order,” and “Gender”) that explore medieval exegesis as a vehicle for the expression of communal or religious identity, one that reflects shared or competing notions of sacred history and sacred text. This timely book will appeal to scholars and lay readers alike and will be essential reading for students of comparative religion, historians charting the history of religious conflict in the medieval Mediterranean, and all those interested in the intersection of Jewish,
Christian, and Muslim beliefs and practices.

“The quality of the studies in Medieval Exegesis and Religious Difference is of a very high level and many [of the essays] break new ground based on the close study of manuscripts or the examination of familiar texts from new perspectives.”---—Barry Dov Walfish, University of Toronto Library

...the volume itself is well produced and rewards patient reading.---—Matthew Gabriele, Al-Masāq: Journal of the Medieval Mediterranean

This is overall one of the most productive and original volumes to appear in recent years on medieval interfaith relations... The contributors, and the editor too, are to be commended for chiseling away at these bonded layers of textual commentaries and revealing to us the meandering streams of interfaith exchanges flowing beneath. - The Medieval Review

Edited: Ryan Szpiech
Ryan Szpiech is Associate Professor at the University of Michigan, Ann Arbor. His most recent book is Conversion and Narrative: Reading and Religious Authority in Medieval Polemic (University of Pennsylvania, 2012), and he is also currently editor-in-chief of the journal Medieval Encounters.