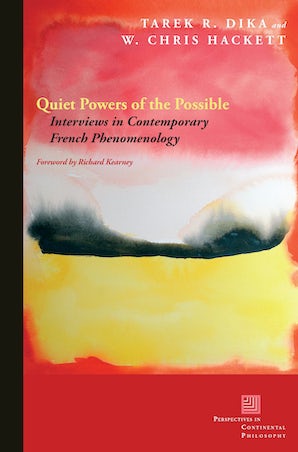 Quiet Powers of the Possible

Quiet Powers of the Possible offers an excellent introduction to contemporary French phenomenology through a series of interviews with its most prominent figures.

Guided by rigorous questions that push into the most important aspects of the latest phenomenological research, the book gives readers a comprehensive sense of each thinker’s intellectual history, motivations, and philosophical commitments.

The book introduces readers to debates that have not previously been accessible to the English-speaking world, such as the growing interest in the phenomenological concept of life in its affective and even vital dimensions, the emerging dialogue with the analytic philosophy of mind and language, and reassessments of the so-called theological turn.

The diversity of approaches collected here has its origin in a deeper debate about the conceptual and historical foundations of phenomenology itself. In this way the book offers the most accessible and wide-ranging introduction to French phenomenology to have appeared in the English-speaking world to date.

Eureka! Here's a book that we — teachers, students and readers — have all been waiting for: hearing the 'new phenomenologists' in conversation. There is no better way to begin a study of the recent irruptions in phenomenology than to read this book.---—Kevin Hart, University of Virginia

Eureka! Here's a book that we — teachers, students and readers — have all been waiting for: hearing the 'new phenomenologists' in conversation. There is no better way to begin a study of the recent irruptions in phenomenology than to read this book. - —Kevin Hart, University of Virginia

Foreword: Richard Kearney
Richard Kearney is Charles Seelig Chair of Philosophy at Boston College and author and editor of more than forty books on contemporary philosophy and culture. He is founding editor of the Guestbook Project and has been engaged in developing a postnationalist philosophy of peace and empathy over several decades. His most relevant books on this subject include Strangers, Gods and Monsters (2001), Postnationalist Ireland (1998), Hosting the Stranger (2012), Phenomenologies of the Stranger (2010), Imagination Now (2019), and Touch: Recovering Our Most Vital Sense (2021).