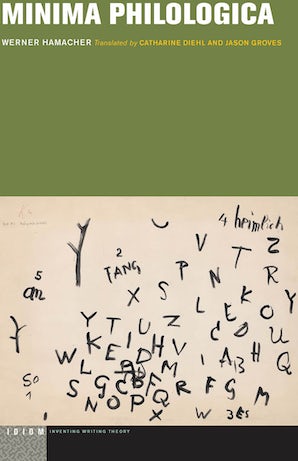 Minima Philologica brings together two essays by Werner Hamacher that are meant to revitalize philology as a practice beyond its restriction to the restoration of linguistic data and their meanings. In these two texts, “95 Theses on Philology” and “For—Philology,” Hamacher propounds a notion of generalized philology that is equivalent to the real production of linguistic utterances, and indeed utterances not limited to predicative or even discursive statements. Philology, in speaking for language where no clear and distinct language is given, exhibits and exposes the structure of language in general. The first text, “95 Theses on Philology,” challenges academic philology as well as other disciplines across the humanities and sciences that “use” language, assuming it to be a given entity and not an event. The theses develop what Hamacher calls the “idea of philology” by describing the constitution of its objects, its relation to knowledge, its suspension of consciousness, and its freedom for what remains always still to be said.

In “For—Philology,” both speaking and writing, Hamacher argues, follow, discursively and non-discursively, the desire for language. Desire—philía—is the insatiable affect that drives the movement between utterances toward the next and the one after that. Desiring language—logos—means to respond to an alien utterance that precedes you, ignorant about where the path will lead, accepting loss and uncertainty, thinking in and through language and the lack of it, exceeding, returning, responding to others, cutting into and off what is to be said. In arguing this, Hamacher responds, directly or obliquely, to other philological thinkers such as Plato and Schlegel, Nietzsche, Benjamin, and Heidegger, as well as to poets such as Rene Char, Francis Ponge, Paul Celan, and Friedrich Holderlin. Taken together, the essays of Minima Philologica constitute a manifesto for a new understanding of linguistic existence that breaks new ways of attending to language and those who live by it.

Hamacher’s thoughtful and provocative theses on philology instigate nothing less than a full reformation of our relationship with language—a penetrating declaration of love that sets refreshingly new terms for interminable engagement.---—John T. Hamilton, Harvard University

Even as Minima Philologica prompts comparison with such masterpieces of aphoristic prose as Schlegel’s “Athenäum Fragments,” Nietzsche’s Gay Science, and Adorno’s Minima Moralia, it asks of its readers that they explore the incomparable—in other words, the philological—elements in whatever falls under the categories of culture, science, and morality.---—Peter Fenves, Northwestern University

“The philological questions relentlessly posed in this brilliant volume in no way fall within the confines of a foreclosed academic discipline. Rather, Minima Philologica opens up our modes of knowing and not knowing, philosophy, and language. The writings of Werner Hamacher have long served as something of a touchstone for students of literature and philosophy. The work associated with that authorial name, here as elsewhere, is also a thinking with and thinking against, a call to and response to, a plethora of Western writers. It is impossible to overestimate the breadth of the book’s implications and impossible to overestimate the force of its readings. And yet again, Minima Philologica is a remarkable achievement perhaps less for the complex, multi-faceted content it so carefully seems to communicate than for the daring, almost carefree exuberance of its written performance.  This ‘act of searching itself,’ which Hamacher also speaks of as a ‘catastrophe of questioning,’ will result in ‘astonishment and wonder’ for the reader.”---—Carol Jacobs, Yale University

Translated: Jason Groves
Jason Groves is Assistant Professor of Germanics at the University of Washington. He is cotranslator of Werner Hamacher’s Minima Philologica.