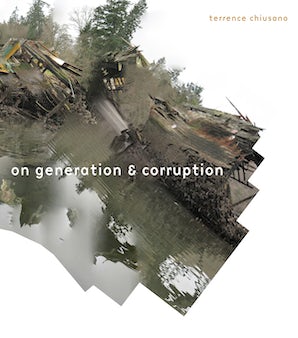 Composed of several distinct yet inter-woven long poems, On Generation & Corruption is structured around the conceits of location and dislocation, as it deconstructs a picture-postcard American town. Its title is a clue: in printer’s terms, each “generation” reproduced is more “corrupt” than the last. Through this metaphor, Chiusano alludes to the distance from confessional speech that the book embodies in its complex tales and Escher-like syntax.

JULY 2
The stare stares behind-the-back, bright, between butt-crack and
thigh. The stare widens into a paddle, wide and flat enough to make a
draft when it flaps. The stare picks its nose. The stare halfway wonders
why the closet door is only half-closed.

When ecstasy is parted from its practice, when rapture is forced to
choose, that’s me: the first efforts, independent principalities.

JULY 3
If I draw a hand, say, or a foot, I tow it into view. If I name, a slender
ankle, a napping neck, I pull it like a dove out of a derby, pigeon out of a
porkpie hat.

On Generation & Corruption is a book to which lovers of pure language can return again and again. - —Pittsburgh City Paper

“‘Explorative,’ ‘meta-narrative,’ all such designations are too tame for describing the brainy and bold manner in which Terrence Chiusano’s On Generation & Corruption presides over the disruption of ‘the clinical completeness of the daily briefing, the dull dit-dot-dash of a poetry-making telegraph…’ Discursive, formally inventive, endlessly sharp-witted, and gorgeously written, [this] is one of the freshest and most unorthodox books (let alone first books) I have read in a very long time.”---—Lynn Emanuel, University of Pittsburgh

“Philosophy always ends in a ‘halo of fact.’ That is why its findings are neither eternal nor sufficient, and its ceaseless agenda is the leitmotif of Terrence Chiusano’s On Generation & Corruption. Taking off from Aristotle, but also Robert Creeley and Vladimir Nabokov, Chiusano proceeds to define a precinct especially for his materials. Lyric distillation is Chiusano’s ‘gloomy grip’ (he has it like no other), and he uses it to structure an esoteric monument. But it’s not esoteric as it happens—again, like philosophy, you read merely because you exist and may yet belong to something called ‘civilization,’ and you need to figure it out, too. And suddenly: mystery solved. Brilliant.” - —Patrick Durgin

“Chiusano gives us deft story-telling that gives hints of horror within scenes of the ordinary and the aesthetic, testing how we read both landscapes and language. On Generation & Corruption plays with orders, patterns, and modes of distinction, playfully moving between the miniature and major, field and street, foreground and background, parable and spin. Combining a sensual lyricism with philosophical edge, the sustained, layered performance and dazzling stunt-work of this collection confirm Chiusano as a stand-out poet to watch and listen to today.” - —Ann Vickery

“Ten years ago I wrote of Mr. Chiusano that he is ‘almost frighteningly good,’ and here, in his first full-length book, the fear factor has only flowered. His is a world of familiar shapes rendered strange by unspeakable events offstage, a country where the intimate processes of nature and gender turn raw in late afternoon sun. Had he written only the luscious, Edward Goreyesque ‘Abecedary,’ his name would live forever in poetic history. And yet there is much more to On Generation & Corruption than its set-pieces. A compelling volume, rich with chills and fever.” - —Kevin Killian

“‘Explorative,’ ‘meta-narrative,’ all such designations are too tame for describing the brainy and bold manner in which Terrence Chiusano’s On Generation & Corruption presides over the disruption of ‘the clinical completeness of the daily briefing, the dull dit-dot-dash of a poetry-making telegraph…’ Discursive, formally inventive, endlessly sharp-witted, and gorgeously written, [this] is one of the freshest and most unorthodox books (let alone first books) I have read in a very long time.” - —Lynn Emanuel, University of Pittsburgh

By (author) Terrence Chiusano
Terrence Chiusano received his B.A. in Poetry Writing from the University of Pittsburgh and his M.A. in Literature from the University at Buffalo. His poems have appeared in Colorado Review, Cordite Poetry Review, Yellow Field, Kenning, Ixnay, Queen Street Quarterly, Basinski: A Zine of the Arts, Ignation, and elsewhere. He lives in Pittsburgh.