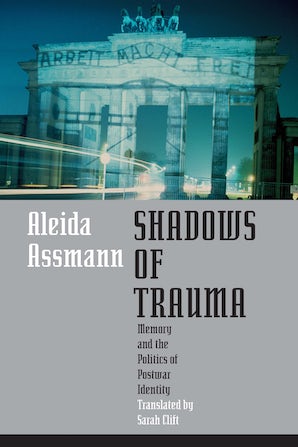 Memory and the Politics of Postwar Identity

We have left the twentieth century, but this century of violence and extremes has not left us: Its shadow has become longer and blacker. Seventy years after the end of the Second World War, the memory of the Holocaust is less and less anchored in the lived experience of survivors and witnesses.

Shadows of Trauma analyzes the transformation of the past from an individual experience to a collective construction, with special attention to the tensions that arise when personal experience collides with official commemoration.

In addition to surveying memory’s important terms and distinctions, Assmann traces the process that emerged after the fall of the Berlin Wall, of creating a new German memory of the Holocaust. Assmann revisits the pitfalls of “false memory” and lingering forms of denial and repression, as well as the new twenty-first-century
discourses, such as that of German “victimhood,” as well as the new memory sites for a future in which German memory will be increasingly oriented toward a European context.

Combining theoretical analysis with historical case studies, the book revisits crucial debates and controversial issues out of which “memory culture” has emerged as a collective project and a work in progress.

“The appearance in English of this major text by Aleida Assmann will be welcomed by all scholars of cultural memory. Shadows of Trauma, lucidly translated by Sarah Clift, offers both an important introduction to Assmann’s influential thinking about how individuals and societies recall traumatic pasts and a sustained exploration of the memory of the Holocaust and World War II in the German context.”---—Michael Rothberg, author of Multidirectional Memory: Remembering the Holocaust in the Age of Decolonization

“For readers of German, Shadows of Trauma is a classic in the field of memory studies. We are fortunate now to benefit from Aleida Assmann’s elegant elucidation of key theoretical concepts and analysis of important debates animating the memory of the Second World War and the Holocaust in contemporary Germany. At the same time, Assmann’s own original and often
surprising conceptualizations of the workings of individual, social, political, and collective memory are as definitive as they are provocative and productive.”