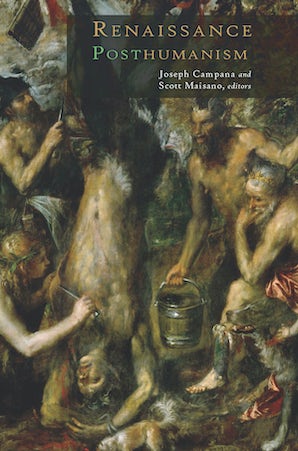 Description
Connecting Renaissance humanism to the variety of “critical posthumanisms” in twenty-first-century literary and cultural theory, Renaissance Posthumanism reconsiders traditional languages of humanism and the human, not by nostalgically enshrining or triumphantly superseding humanisms past but rather by revisiting and interrogating them. What if today’s “critical posthumanisms,” even as they distance themselves from the iconic representations of the Renaissance, are in fact moving ever closer to ideas in works from the fourteenth to the seventeenth century? What if “the human” is at once embedded and embodied in, evolving with, and de-centered amid a weird tangle of animals, environments, and vital materiality? Seeking those patterns of thought and practice, contributors to this collection focus on moments wherein Renaissance humanism looks retrospectively like an uncanny “contemporary”—and ally—of twenty-first-century critical posthumanism.
Reviews

Fiery flint and weeping marble, hairy mandrakes and ardent monkeys, flayed skins and inky parchments, chimp-like sheep and one-eyed cows: these are among the quirky and vibrant actors assembled in this exciting and timely new volume. In search of Renaissance posthumanism, the authors examine unfamiliar archives in response to current environmental and technological urgencies, and their inventive and thoughtful readings will spur new lines of inquiry.---—Julia Reinhard Lupton, University of California, Irvine

This innovative book aims to point out gaps in previous studies... It examines the spread of popular knowledge in a world moved by violence and dejection, which implies a dishumanization of both the body and the human essence. - Sixteenth Century Journal

Fiery flint and weeping marble, hairy mandrakes and ardent monkeys, flayed skins and inky parchments, chimp-like sheep and one-eyed cows: these are among the quirky and vibrant actors assembled in this exciting and timely new volume. In search of Renaissance posthumanism, the authors examine unfamiliar archives in response to current environmental and technological urgencies, and their inventive and thoughtful readings will spur new lines of inquiry. - —Julia Reinhard Lupton, University of California, Irvine

Edited: Joseph Campana
Joseph Campana is Alan Dugald McKillop Chair and Associate Professor at Rice University. He is the author of The Pain of Reformation: Spenser, Vulnerability, and the Ethics of Masculinity (Fordham, 2012), which won the South Central MLA Book Prize, and two collections of poetry, The Book of Faces (Graywolf, 2005) and Natural Selections (Iowa, 2012), which won the Iowa Poetry Prize. His essays have appeared in PMLA, Modern Philology, ELH, Shakespeare, Shakespeare Studies, and elsewhere. He is currently completing two studies, The Child’s Two Bodies, which considers children and sovereignty in the works of Shakespeare, and Bee Tree Child, which explores scale, multiplicity, plasticity, and other new rubrics for calibrating the relationship between human and non-human worlds in the Renaissance.

Scott Maisano is Associate Professor of English at the University of Massachusetts,Boston. His most recent publications include “Shakespeare’s Revolution: The Tempest as Scientific Romance,” about Prospero and particle physics in The Tempest: A Critical Guide (Bloomsbury Arden Shakespeare);
“Now,” about Einsteinian spacetime in The Winter’s Tale, for Early Modern Theatricality (Oxford University Press); “Rise of the Poet of the Apes,” about intelligent apes and monkeys in plays from the beginning to the end of Shakespeare’s career, for Shakespeare Studies; and “Seen / Not Seen” about “behind-the-scenes,” “offstage,” and “bawdy” (or in a word “obscene”) matters in A Midsummer Night’s Dream for iPad (Luminary Digital Media). He is currently coauthoring a book on Shakespeare and Primatology with Holly Dugan and writing a new Shakespearean comedy entitled Enter Nurse, or, Love’s Labour’s Wonne.