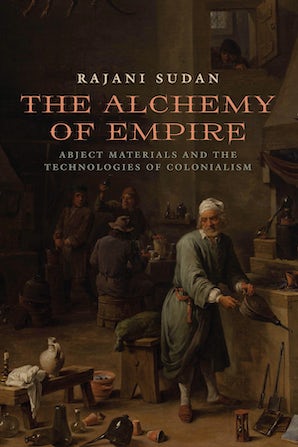 The Alchemy of Empire unravels the non-European origins of Enlightenment science. Focusing on the abject materials of empire-building, this study traces the genealogies of substances like mud, mortar, ice, and paper, as well as forms of knowledge like inoculation. Showing how East India Company employees deployed the paradigm of alchemy in order to make sense of the new worlds they confronted, Rajani Sudan argues that the Enlightenment was born largely out of Europe’s (and Britain’s) sense of insecurity and inferiority in the early modern world. Plumbing the depths of the imperial archive, Sudan uncovers the history of the British Enlightenment in the literary artifacts of the long eighteenth century, from the correspondence of the East India Company and the papers of the Royal Society to the poetry of Alexander Pope and the novels of Jane Austen.

“An intriguing book that brings together an array of literary and non-literary texts dealing with eighteenth-century British response to South Asian techne. Sudan is a significant voice in global eighteenth-century studies as well as a leading critic of Anglo-Indian Relations.”---—Robert Markley, University of Illinois

Given its interdisciplinary scope... The Alchemy of Empire will be a valuable point of reference for a range of scholars. - The British Society for Literature and Science

Rajani Sudan's The Alchemy of Empire captivates the reader due to its approach to material geographies of imperial technology that shows a shift from the translocation of unfamiliar base matters and the transfer of foreign techne and knowledge to the stabilisation of (imperial) knowledge via ideologies of immobile geographies. - Anglistik: International Journal of English Studies

A tour de force that rhapsodically rethinks what force itself might be. - Studies in English Literature