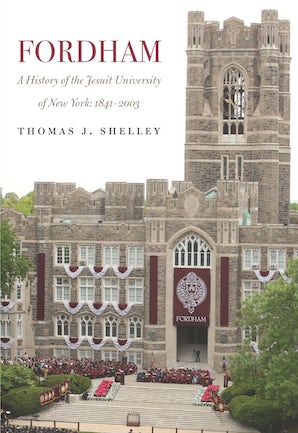 “Archbishop John Hughes, my predecessor, knew that education was a crucial mission of the Catholic Church and made the establishment of a Catholic college one of his top priorities with the founding of St. John’s College in 1841. He also realized that the Jesuits were consistently among the best in the world at providing university-level education. In this detailed and fascinating work, Monsignor Thomas Shelley traces the history of Fordham University from its humble beginnings to its current position as a leading center of higher learning. The reader will learn not only about the Jesuit University of New York, but also come away with an enriched understanding of the history of Catholicism in the United States, reflected masterly by Shelley’s expert storytelling.”---—Timothy Michael Cardinal Dolan, Archbishop of New York

This is a terrific book -- deeply researched, thorough in coverage, fair in its judgments, written in a clear and engaging style. It does full justice to Fordham's storied past and present stature.---—Philip Gleason, Professor Emeritus of History, University of Notre Dame

“Tom Shelley’s distinguished record as an historian of Catholic America, with a particular mastery of the Catholic experience in New York, makes him an ideal choice to produce the first full-scale history of one of the most important Catholic institutions of higher education in the United States. The vivid writing briskly carries the story along; the unobtrusive, shrewd evaluations provide an appropriate weight to the narrative. From his apt chapter titles, through his careful layering of context, to his uniformly spot-on characterizations, this is first-rate history. He has really captured Fordham’s unique history.”---—Emmett Curran, Professor Emeritus of History, Georgetown University

Like any university, Fordham is a big, complicated thing, and Shelley is no
doubt painfully aware of the many subjects and stories he has had to leave out of this history, lest the work become encyclopedic. What he has done, however, is provide an expertly researched and smoothly written account that will attract grateful readers, not just from among Fordham alumni and alumnae, but also from anyone with an interest in works of the Jesuit order and the importance of higher education in the United States.

Since 1841 Fordham has played a pivotal role in the educational and cultural life of the Bronx and wider New York City. Shelley provides a detailed institutional history that charts both triumphs and setbacks, the shifting pedagogical trends, and Fordham’s identity in the new millennium. - Catholic Herald

Trying to capture the nuts and bolts of any institution the size of Fordham University can test the heart of any historian. Fortunately the university employed Father Shelley to do the job. His volume serves not only as a dispassionate exposition of the fits and starts of this now-venerable force in higher learning, but he tells the story with vigor and aplomb. - Catholic Library World