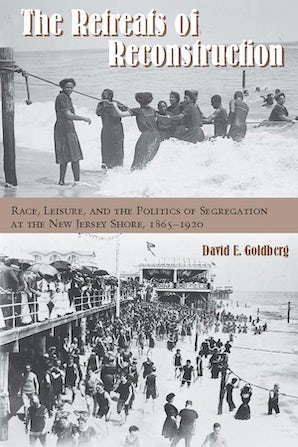 Combining intellectual, social, and cultural history, The Retreats of Reconstruction examines how these decisions helped popularize the doctrine of “separate but equal” and explains why the politics of consumption is critical to understanding the “long civil rights movement.”

Breaking away from the usual debates concerning post-Civil War America, David E. Goldberg explores race relations on the Jersey Shore in ways that should attract the attention not only of scholars of segregation but also of consumerism, leisure, and African American life in the North. There are good stories here ranging from the founding of Asbury Park to the lives of African American waiters as well as challenging ideas that stretch beyond the old narratives concerning the rise of Jim Crow in Northern states.---—Paul A. Cimbala, Fordham University

For the Civil War historian who wishes to explore the social aspects of a society altered by war, or analyze how America coped with integrating postbellum society, this well researched, readable and scholarly look at the challenges of individuals, businesses and political entities is useful. Likewise, for readers who wish to explore the connection of consumerism, leisure and integration in the Reconstruction Era, this book is recommended. - Civil War News