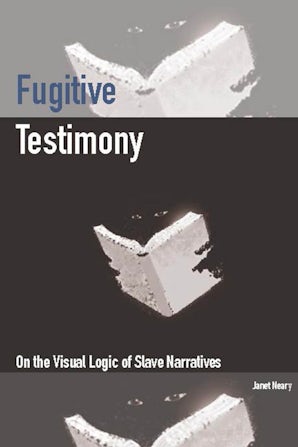 Fugitive Testimony traces the long arc of the African American slave narrative from the eighteenth century to the present in order to rethink the epistemological limits of the form and to theorize the complicated interplay between the visual and the literary throughout its history. Gathering an archive of ante- and postbellum literary slave narratives as well as contemporary visual art, Janet Neary brings visual and performance theory to bear on the genre’s central problematic: that the ex-slave narrator must be both object and subject of his or her own testimony.

Taking works by current-day visual artists, including Glenn Ligon, Kara Walker, and Ellen Driscoll, Neary employs their representational strategies to decode the visual work performed in nineteenth-century literary narratives by Elizabeth Keckley, Solomon Northup, William Craft, Henry Box Brown, and others. She focuses on the textual visuality of these narratives to illustrate how their authors use the logic of the slave narrative against itself as a way to undermine the epistemology of the genre and to offer a model of visuality as intersubjective recognition rather than objective division.

In this original book Janet Neary views nineteenth-century slave narratives through the lens of contemporary art. This innovative strategy enables her to bring into focus the visual work of slave narratives and their resistance to the conventions of authentication. This is an important book that demonstrates how literature participates in the concerns of visual culture and how nineteenth-century problems of race and representation persist in the present.---—Shawn Michelle Smith, School of the Art Institute of Chicago

For researchers focused on the political and social dynamics of Southern society, this text is recommended. - Civil War News