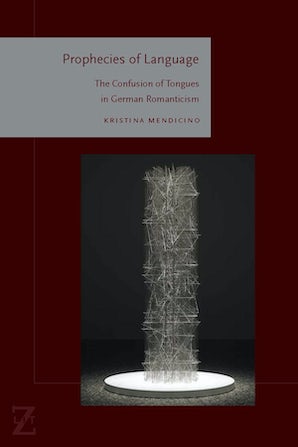 The Confusion of Tongues in German Romanticism

The scenes of Babel and Pentecost, the original confusion of tongues and their redemption through translation, haunt German Romanticism and Idealism. This book begins by retracing the ways in which the task of translation, so crucial to Romantic writing, is repeatedly tied to prophecy, not in the sense of telling future events, but in the sense of speaking in the place of another—most often unbeknownst to the speaker herself. In prophetic speech, the confusion of tongues repeats, each time anew, as language takes place unpredictably in more than one voice and more than one tongue at once.

Mendicino argues that the relation between translation and prophecy drawn by German Romantic writers fundamentally changes the way we must approach this so-called “Age of Translation.” Whereas major studies of the period have taken as their point of departure the opposition of the familiar and the foreign, Mendicino suggests that Romantic writing provokes the questions: how could one read a language that is not one? And what would such a polyvocal, polyglot language, have to say about philology—both for the Romantics, whose translation projects are most intimately related to their philological preoccupations, and for us?

In Prophecies of Language, these questions are pursued through readings of major texts by G.W.F. Hegel, Wilhelm von Humboldt, Friedrich Schlegel, and Friedrich Hölderlin. These readings show how, when one questions the presupposition of works composed by individual authors in one tongue, these texts disclose more than a monoglot reading yields, namely the “plus” of their linguistic plurality. From such a surplus, each chapter goes on to advocate for a philology that, in and through an inclination toward language, takes neither its unity nor its structure for granted but allows itself to be most profoundly affected, addressed—and afflicted—by it.

Prophecies of Language offers strikingly original insights into some of the most complex dimensions of Idealist and Romantic thought. Mendicino’s ingenious analyses help us rethink the singular challenges of these canonical texts in innovative ways.---—Jan Mieszkowski, Reed College