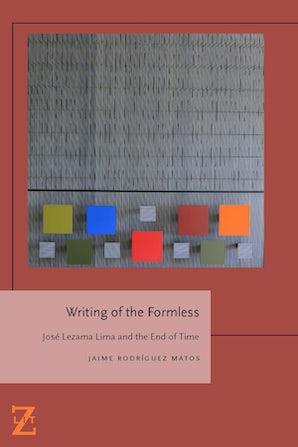 Writing of the Formless

Jose Lezama Lima and the End of Time

In this book, Jaime Rodríguez Matos proposes the “formless” as a point of departure in thinking through the relationship between politics and time. Thinking through both literary and political writings around the Cuban Revolution, Rodríguez Matos explores the link between abstract symbolic procedures and various political experiments that have sought to give form to a principle of sovereignty based on the category of representation. In doing so, he proposes the formless as the limit of modern and contemporary reflections on the meaning of politics while exploring the philosophical consequences of a formless concept of temporality for the critique of metaphysics.

Rodríguez Matos takes the writing and thought of José Lezama Lima as the guiding thread in exploring the possibility of a politicity in which time is imagined beyond the disciplining functions it has had throughout the metaphysical tradition—a time of the absence of time, in which the absence of time no longer means eternity.

Deep and dazzling. The Writing of the Formless dismantles or powerfully threatens the very basis of much of what today wants to present itself as 'properly leftist’ thought but also the equally paralyzing liberal-democratic administration of things: both ideologies are anchored in disavowed understandings of temporality. This is a groundbreaking, extraordinary book that will mark a before and after in Latinamericanism.---—Alberto Moreiras, Texas A&M University