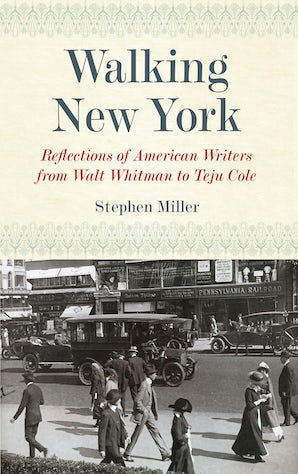 Reflections of American Writers from Walt Whitman to Teju Cole

THE NEW YORK OBSERVER: ONE OF THE TOP 10 BOOKS FOR FALL

It’s no wonder that New York has always been a magnet city for writers. Manhattan is one of the most walkable cities in the world. While many novelists, poets, and essayists have enjoyed long walks in New York, not all of them have had favorable impressions. Addressing an endlessly appealing subject, Walking New York is a study of twelve American writers and several British writers who walked the streets of New York and wrote about their impressions of the city in fiction, nonfiction, and poetry.

In this idiosyncratic guidebook to New York, celebrated writers ruminate on questions that are still hotly debated to this day: the pros and cons of capitalism and the impact of immigration. Many imply that New York is a bewildering text that is hard to make sense of. Returning to New York after an absence of two decades, Henry James loathed many things about “bristling” New York, while native New Yorker Walt Whitman both celebrated and criticized “Mannahatta” in his writings.

“A brilliant analysis of walking in New York and how it has been viewed and experienced by some of our greatest writers. Miller’s analysis of Walt Whitman, Charles Dickens, Henry James, Teju Cole, Alfred Kazin, and others is both incisive and highly original.”---—William Helmreich, author of The New York Nobody Knows: Walking 6,000 Miles in the City

“I can’t imagine any specialist in the field not finding this book a worthy addition to the literature. It’s a pleasure to read.”---—Phillip Lopate, Director, Nonfiction Graduate Program at Columbia University

“Walking New York, although socially aware, is an unashamed work of literary studies, recounting for its readers the way this particular city has seized the attention of the writers, how they have been affected by it, and how it has been reflected in their work.”---—John McLaren, Victoria University, Melbourne

Stephen Miller's Walking New York surveys an urban and literary landscape, focusing on writers who have taken Manhattan as turf, laboratory and crucible for their creations. . . Mr. Miller is an amiable guide, filling his chapters with interesting facts and reminders of how Manhattan has always both embodied change and retained constancy. - —Willard Spiegelman, The Wall Street Journal

In 'Walking New York', essayist Stephen Miller takes a look at the city's literary perambulators, examining the writing of Stephen Crane, Alfred Kazin and Teju Cole, among others, and offering an evolving portrait of New York through the centuries. 'Each Writer' Mr. Miller says in the book's preface, 'wanders a different city'. - —The New York Observer