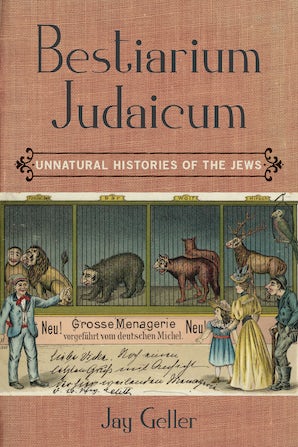 Given the vast inventory of verbal and visual images of nonhuman animals—pigs, dogs, vermin, rodents, apes disseminated for millennia to debase, dehumanize, and justify the persecution of Jews, Bestiarium Judaicum asks: What is at play when Jewish-identified writers tell animal stories?

Focusing on the nonhuman-animal constructions of primarily Germanophone authors, including Sigmund Freud, Heinrich Heine, Franz Kafka, and Gertrud Kolmar, Jay Geller expands his earlier examinations (On Freud’s Jewish Body: Mitigating Circumcisions and The Other Jewish Question: Identifying the Jew and Making Sense of Modernity) of how such writers drew upon representations of Jewish corporeality in order to work through their particular situations in Gentile modernity. From Heine’s ironic lizards to Kafka’s Red Peter and Siodmak’s Wolf Man, Bestiarium Judaicum brings together Jewish cultural studies and critical animal studies to ferret out these writers’ engagement with the bestial answers upon which the Jewish and animal questions converged and by which varieties of the species "Jew" were identified.

Jay Geller’s Bestiarium Judaicum: Unnatural Histories of the Jews is a remarkable monograph that has no parallel in scholarly literature. The author offers a sophisticated conceptual and historical account of how the longstanding discourse about the animality of the Jew is accompanied by an iconography of an unnatural Jewish bestiary. The racial anti-Semitism that fueled the horrors of the Holocaust is contextualized in a new and thought-provoking way.---Elliot R. Wolfson, University of California, Santa Barbara

Bestiarium Judaicum combines insightful analysis of the texts under investigation with extensive research into its subject matter. It deftly constructs a complex intertextual network while situating its constitutive components within the social and historical context of their composition. - Reading Religion

Informed by critical animal studies, new historicism, and psychoanalysis, Jay Geller's Bestiarium Judaicum: Unnatural Histories of the Jews is witty and wide-ranging, its richness matching that of the modern Jewish literary works it treats.---Beth A. Berkowitz, Religion

Jay Geller must have been collecting beasts—or rather, textual identifications of Jews with beasts—for quite a long time before gathering them in his recent book, Bestiarium Judaicum... In its explorations of the varied invocations of animals in the texts by Jewish authors, Geller offers a more persuasive model for understanding these texts than that of self-hatred or internalized anti-semitism. - German Quarterly

In Bestiarium Judaicum, Jay Geller brings together the Jewish Question with the question of the animal. He explores the ways in which Jews, particularly in German-speaking European Modernity (between 1750 and the Shoah), have been dehumanized through images of animals, and how they, in turn, have written back to undermine these anti-Semitic stereotypes with animal figures of their own. - Humanimalia

[Geller] is exceptionally, and in a way that I find profoundly ethical, modest in his refusal either to celebrate his several authors as cultural heroes of Jewish self-worth or to denigrate them as capitulating to dominant stereotypes. What he offers is not a new narrative of the past, nor even a new map of what it is, or whose story we need to tell. He challenges us, rather, to return to the archives as more careful readers, especially but not only because he has made us more sensitive to the slippages between analogy and dichotomy in the fateful pairs "animal-human," "Jew-human," and "Jew-animal."---Jonathan Boyarin, Antisemitism Studies

Geller’s book is an extraordinary one. Its meticulously researched detail, intellectual rigor, and analytical acuity, no less than its broad yet never unrestrained sweep, recommend it to scholars from many disciplines, including German culture and literature, Jewish studies, cultural history, antisemitism studies, and animal studies. - Central European History

By (author) Jay Geller
Jay Geller is Professor of Modern Jewish Culture at Vanderbilt Divinity School and the Vanderbilt University Jewish Studies Program, and has also taught at the University of Vienna, Bryn Mawr College, Princeton University, Rutgers University, Swarthmore College, and Wesleyan University. He is the author of On Freud’s Jewish Body: Mitigating Circumcisions (2007), The Other Jewish Question: Identifying the Jew and Making Sense of Modernity (2011), and Bestiarium Judaicum: Unnatural Histories of the Jews (2018), all from Fordham University Press; and the co-editor of Reading Freud’s Reading (New York University Press, 1994).