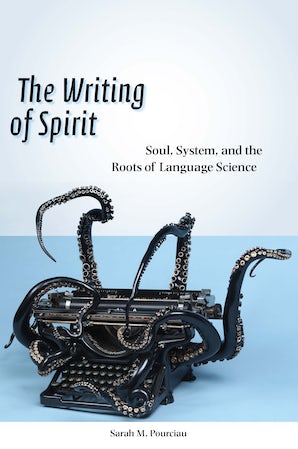 The Writing of Spirit

Soul, System, and the Roots of Language Science

Contemporary thought has been profoundly shaped by the early-twentieth-century turn toward synchronic models of explanation, which analyze phenomena as they appear at a single moment, rather than diachronically as they develop through time. But the relationship between time and system remains unexplained by the standard account of this shift. Through a new history of systematic thinking across the humanities and sciences, The Writing of Spirit argues that nineteenth-century historicism wasn’t simply replaced by a more modern synchronic perspective. The structuralist revolution consisted rather in a turn toward time’s absolutely minimal conditions, and thus also toward a new theory of diachrony.

Pourciau arrives at this surprising and powerful conclusion through an analysis of language-scientific theories over the course of two centuries, associated with thinkers from Jacob Grimm and Richard Wagner to the Russian Futurists, in domains as disparate as historical linguistics, phonology, acoustics, opera theory, philosophy, poetics, and psychology. The result is a novel contribution to a pressing contemporary question—namely, what role history should play in the interpretation of the present.

“A probing and theoretically rich study on the history of linguistics, replete with impeccable research, insightful analyses, and daring but compelling conclusions, The Writing of Spirit is a brilliant accomplishment, certain to have a major impact on our understanding of language, physiological psychology, and the limits of structuralism.”---John T. Hamilton, Harvard University

The Writing of Spirit opens up new directions of thinking about the rise of language science from the eighteenth century into the first half of the twentieth century... For linguistics scholars, The Writing of Spirit offers a fresh lens through which to view language structure, together with its etymological methodology in the twin language-scientific spheres of linguistics and poetics. - The British Society for Literature and Science

Table of Contents
Introduction Part I. Eternal Etymology: From Sprachgeist to Ferdinand de Saussure 1. Language Ensouled Grammatical Life • Life Science • Kosmon Psychon • How Inflection Unfolds • Etymology: the Method • Spirit Superfluous? • The Demise of Analysis 2. Saussure’s Dream In Search of the Literal • Neither Flesh nor Spirit • But Rather Writing • Postméditation 3. Verse Origins Through the Letters Wafts the Spirit • 2 L, 2 P, 4 R (=2+2) • Little Sticks, Letter Rhymes • The Rhythm of Geist • The Cult of Cancellation Part II. Tending Toward Zero: From Runes to Phonemes 4. Wagner’s Poetry of the Spheres Philology + Harmony • Wotan’s Staff 5. Pythagoras in the Laboratory The Wagnerian Sound of Sense • Wave Systems (Acoustics) • The Undulating All (Psychophysics) • A Philology of the Ear (Poetics) 6. Jakobson’s Zeros Analogy: the Method • Zero Degree Rhyme • The Silent “e” • Mama and Papa • In Retrospect: The Future Afterword Notes Bibliography Index
Details