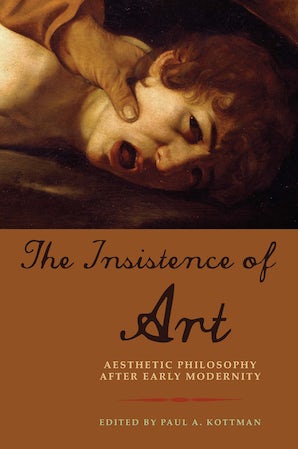 The Insistence of Art

Edited by Paul A. Kottman

Philosophers working on aesthetics have paid considerable attention to art and artists of the early modern period. Yet early modern artistic practices scarcely figure in recent work on the emergence of aesthetics as a branch of philosophy over the course the eighteenth century. This book addresses that gap, elaborating the extent to which artworks and practices of the fifteenth through the eighteenth centuries were accompanied by an immense range of discussions about the arts and their relation to one another.

Rather than take art as a stand-in for or reflection of some other historical event or social phenomenon, this book treats art as a phenomenon in itself. The contributors suggest ways in which artworks and practices of the early modern period make aesthetic experience central to philosophical reflection, while also showing art’s need for philosophy.

This collection on early modern aesthetics of doesn't just fill a gap: In its emphatic refusal to cordon off the Renaissance, and in its conviction that art is no passive mirror but a 'matrix through which social reality is established,' it is a welcome corrective. Dante and Ficino, Donne and Shakespeare, Bellori and Caravaggio, Goya and Pater—with Herder, Hegel, Paul de Man and Kierkeegard making memorable cameos—populate an early modernity that looks ahead to modernism.---—Andrei Pop, University of Chicago

A superb and timely collection—rigorous wide-ranging essays demonstrating some of the most compelling trends in their respective fields. It's the sort of collection that gives substance and urgency to interdisciplinary thinking.---—Christopher Pye, Williams College

This Hegelian approach... of showing the development of practices as philosophically relevant in themselves is perhaps a path that should be followed in future dialogues between philosophy and art. - Journal of Aesthetics and Art Criticism

The story that is so often told about the origins of aesthetics excludes the early modern period because, supposedly, its artworks remained dependent on religion, moral instruction, and other self-evidently authoritative cultural practices. The Insistence of Art resets that discussion by describing the freedom of art precisely in terms of its ability to solicit relations with what lies beyond it and thereby to call its own limits into question. - Renaissance Quarterly

Edited: Paul A. Kottman
Paul Kottman is Associate Professor of Comparative Literature at the New School for Social Research. He is the author of Love as Human Freedom (forthcoming), Tragic Conditions in Shakespeare: Disinheriting the Globe, and A Politics of the Scene.