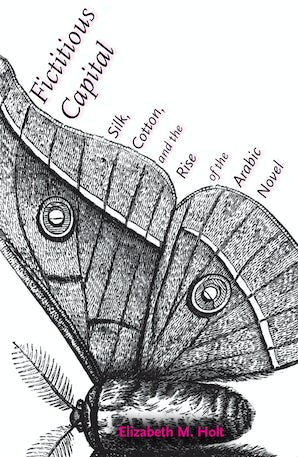 Silk, Cotton, and the Rise of the Arabic Novel

The ups and downs of silk, cotton, and stocks syncopated with serialized novels in the late-nineteenth-century Arabic press: Time itself was changing. Novels of debt, dissimulation, and risk begin to appear in Arabic at a moment when France and Britain were unseating the Ottoman legacy in Beirut, Cairo, and beyond. Amid booms and crashes, serialized Arabic fiction and finance at once tell the other’s story.

While scholars of Arabic often write of a Nahdah, a sense of renaissance, Fictitious Capital argues instead that we read the trope of Nahdah as Walter Benjamin might have, as “one of the monuments of the bourgeoisie that [are] already in ruins.” Financial speculation engendered an anxious mixture of hope and fear formally expressed in the mingling of financial news and serialized novels in such Arabic journals as Al-Jinān, Al-Muqtataf, and Al-Hilāl. Holt recasts the historiography of the Nahdah, showing its sense of rise and renaissance to be a utopian, imperially mediated narrative of capital that encrypted its inevitable counterpart, capital flight.

Compelling, inventive, and brilliantly argued, Elizabeth Holt's Fictitious Capital immediately becomes required reading. Linking literary history to financial speculation, modes of consumption, the development of the press in Arabic, the emergence of the book as a modern form, and the changing forms of language and writing in this period, this book has implications for virtually all of the fields within Arabic studies, and beyond, as it changes the ways in which we think about language, reading, modernity, and economy.---Jeffrey Sacks, University of California, Riverside,

In this meticulously researched study, Elizabeth Holt offers a much needed reassessment of the nineteenth century Arabic cultural movement known as 'al-nahḍah' (revival). Her focus on the linkages between fiction publication and commerce underlines the foundational contributions made by Syro-Lebanese intellectuals in the earliest development of modern Arabic fiction that have continued into the twentieth century and beyond.---—Roger Allen, University of Pennsylvania

The strengths of the Fictitious Capital are its close readings, its extraction of the lexical field of financial and literary keywords from the texts, and the slow philological work that bridges these terms together and to the
respective fields... Holt's book grounds these lexical terms in close readings of widely unread narratives of the Nahḍa, and convincingly places them within a growing conceptual apparatus of capital.

Fiction, in content and form, is a responsive and generative cultural actor, and scholarship cannot but be enriched by an approach such as this one that steadily and skillfully weaves these multiple threads. As such, Fictitious Capital offers to be both a model and a blueprint for future research in Arabic literary studies and beyond. - Middle Eastern Literatures

This important new work challenges paradigms for the study of the rise of the novel and assumptions about the Nahḍah, pushing forward scholarship in the field of Arabic literature. - Journal of Arabic Literature

Elizabeth Holt takes a gigantic step in the direction of telling a pluralistic story of modern Arabic literature in Fictitious Capital: Silk, Cotton, and the Rise of the Arabic Novel. - Literature & History