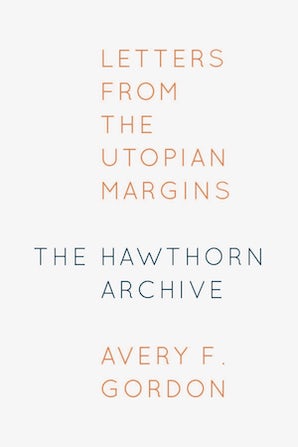 The Hawthorn Archive, named after the richly fabled tree, has long welcomed the participants in the various Euro-American social struggles against slavery, racial capitalism, imperialism, and authoritarian forms of order. The Archive is not a library or a research collection in the conventional sense but rather a disorganized and fugitive space for the development of a political consciousness of being indifferent to the deadly forms of power that characterize our society. Housed by the Archive are autonomous radicals, runaways, abolitionists, commoners, and dreamers who no longer live as obedient or merely resistant subjects.

In this innovative, genre- and format-bending publication, Avery F. Gordon, the “keeper” of the Archive, presents a selection of its documents—original and compelling essays, letters, cultural analyses, images, photographs, conversations, friendship exchanges, and collaborations with various artists. Gordon creatively uses the imaginary of the Archive to explore the utopian elements found in a variety of resistive and defiant activity in the past and in the present, zeroing in on Marxist critical theory and the black radical tradition. Fusing critical theory with creative writing in a historical context, The Hawthorn Archive represents voices from the utopian margins, where fact, fiction, theory, and image converge.

Reminiscent of the later fictions of Italo Calvino or Walter Benjamin’s Arcades Project, The Hawthorn Archive is a groundbreaking work that defies strict disciplinary, methodological, and aesthetic boundaries. And like Ghostly Matters: Haunting and the Sociological Imagination, which established Gordon as one of the most influential interdisciplinary scholars of the humanities and social sciences in recent years, it provides a kaleidoscopic analysis of power and effect. The Hawthorn Archive’s experimental format and inventive synthesis of critical theory and creative writing make way for a powerful reconception of what counts as social change and political action, offering creative inspiration and critical tools to artists, activists, scholars across various disciplines, and general readers alike.

Gordon’s Hawthorn Archive['s]... file cabinets are bottomless and insights consistently wide enough to incorporate Borges, Engels, Bambara, and others. For such a feat, our only appropriate response is gratitude. - American Literary History Online Review

The Hawthorn Archive... breaks open the structures of knowledge by disorienting the academic reader so accustomed to a normative canon... This is a book that believes in the socially committed capacity of art and intellectual discourse to address idioms of systemic power — be it within the academic institution or outside of it — in order to disrupt and reconceive them. - Full Stop: Reviews. Interviews. Marginalia.

Table of Contents
Introduction I. the scandal of the qualitative difference II. a means of preparation III. the exile of our longing IV. perception of the subjectivity of the so-called object List of Images and Items Acknowledgments Notes
Details

By (author) Avery F. Gordon
Avery F. Gordon is Professor of Sociology at the University of California, Santa Barbara, and Visiting Professor in the Birkbeck Department of Law, University of London. Her most recent books are The Workhouse (with Ines Schaber), Ghostly Matters, and Keeping Good Time.