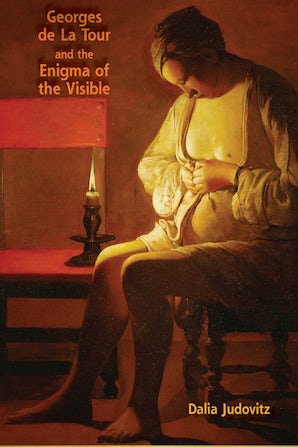 Georges de La Tour and the Enigma of the Visible

Not rediscovered until the twentieth century, the works of Georges de La Tour retain an aura of mystery. At first sight, his paintings suggest a veritable celebration of light and the visible world, but this is deceptive. The familiarity of visual experience blinds the beholder to a deeper understanding of the meanings associated with vision and the visible in the early modern period.

By exploring the representations of light, vision, and the visible in La Tour’s works, this interdisciplinary study examines the nature of painting and its artistic, religious, and philosophical implications. In the wake of iconoclastic outbreaks and consequent Catholic call for the revitalization of religious imagery, La Tour paints familiar objects of visible reality that also serve as emblems of an invisible, spiritual reality. Like the books in his paintings, asking to be read, La Tour’s paintings ask not just to be seen as visual depictions but to be deciphered as instruments of insight. In figuring faith as spiritual passion and illumination, La Tour’s paintings test the bounds of the pictorial image, attempting to depict what painting cannot ultimately show: words, hearing, time, movement, changes of heart.

La Tour’s emphasis on spiritual insight opens up broader artistic, philosophical, and conceptual reflections on the conditions of possibility of the pictorial medium. By scrutinizing what is seen and how, and by questioning the position of the beholder, his works revitalize critical discussion of the nature of painting and its engagements with the visible world.

A century has passed since the paintings of Georges de La Tour were rescued from near oblivion. Yet the interest in his enigmatic achievement has never diminished. Dalia Judovitz surveys a wealth of previous writings, and argues brilliantly for the significance of the new spiritual dimension that his work inhabits.---Stephen Bann, Bristol University

This is an important book that will challenge and inform. It is beautifully illustrated with many of La Tour’s most important paintings in colour. - Literature and Theology

Georges de La Tour and the Enigma of the Visible should be well-stocked and displayed in every art gallery and museum shop where a Georges de La Tour painting is to be found. It will be of use to all those with a specific interest in La Tour’s art and, more generally, in theology, spirituality, and the visual arts. - Reading Religion

This study will be of considerable interest to anyone engaged not only with La Tour but with early modern visual culture as a whole, especially as it relates to the spiritual. - Renaissance Quarterly

Table of Contents
Illustrations Acknowledgements Introduction 1 The Enigma of the Visible 2 Spiritual Passion and the Betrayal of Painting 3 The Visible and the Legible 4 Flea Catching and the Vanity of Painting 5 Painting as Portal: “Birth” and “Death” of the Sacred Image Epilogue Notes Index Selected Bibliography
Details

By (author) Dalia Judovitz
Dalia Judovitz is National Endowment for the Humanities Professor of French at Emory University. Her books include Subjectivity and Representation in Descartes, The Culture of the Body, and more recently, works on Duchamp and modernist aesthetics.