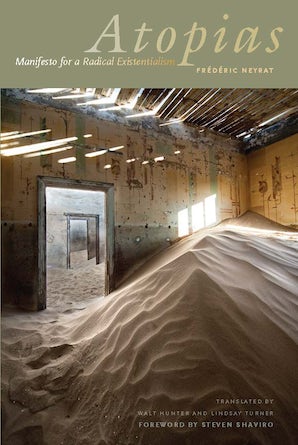 Authors & Distributors
Frédéric Neyrat (Author)
Frederic Neyrat is Associate Professor of Comparative Literature at University of Wisconsin-Madison. He is editor of Alienocene, an online journal that charts the environmental humanities and contemporary theory. His first book in English (following thirteen in French) is Atopias: Manifesto for a Radical Existentialism (Fordham, 2018).

Walt Hunter (Translator)
Walt Hunter is Associate Professor of World Literature at Clemson University. He is co-translator of Frédéric Neyrat’s Atopias: Manifesto for a Radical Existentialism.

Everything is in flux, as we are told over and over again. And yet, these are fluxes in which nothing ever really changes. . . . Other thinkers have characterized globalized and financialized capitalism in this way; Neyrat sees it as a dilemma for critical thought as well. . . . In a world where anything can be anyplace, and anything can switch places with anything else, philosophy must insist on its power to be, not everyplace, but noplace. It must never fit in, but always disturb its context, . . . maintaining a relation with the very Outside that our dominant social, economic, and intellectual conditions seek to deny or suppress. . . . Above all, Atopias is a work of ethics, exhorting us to recognize and find room for the many forms of existence with whom we share our planet.---—from Steven Shaviro’s Foreword,