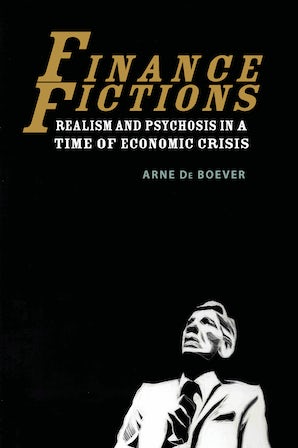 Finance Fictions takes the measure of what it means to live in a world ruled by high finance by examining the tension between psychosis and realism that plays out in the contemporary finance novel. When the things traded at the center of the economy cease to be things at all, but highly abstracted speculations, how do we come to see the real? What sorts of narrative can accurately approach the actual workings of a neoliberal economy marked by accelerating cycles of market crashes, economic and political crisis, and austerity?

Revisiting such twentieth-century classics of the genre as Tom Wolfe's Bonfire of the Vanities and Bret Easton Ellis’s American Psycho, De Boever argues that the twenty-first century is witnessing the birth of a new kind of realistic novel that can make sense of complex financial instruments like collateralized debt obligations, credit default swaps, and digital algorithms operating at speeds faster than what human beings or computers can record. If in 1989 Wolfe could still urge novelists to work harder to “tame the billion-footed beast of reality,” today’s economic reality confronts us with a difference that is qualitative rather than quantitative: a new financial ontology requiring new modes of thinking and writing.

Mobilizing the philosophical thought of Quentin Meillassoux in the close reading of finance novels by Robert Harris, Michel Houellebecq, Ben Lerner and less well-known works of conceptual writing such as Mathew Timmons’ Credit, Finance Fictions argues that realism is in for a speculative update if it wants to take on the contemporary economy—an “if” whose implications turn out to be deeply political. Part literary study and part philosophical inquiry, Finance Fictions seeks to contribute to a new mindset for creative and critical work on finance in the twenty-first century.

Finance Fictions is a remarkable achievement. Arne De Boever blends detailed attention to high finance with close readings of an unexpected array of contemporary novels. Along the way he touches on work by many of the leading figures in contemporary literary studies and theory, from American Psycho to Quentin Meillassoux’s writings on science fiction. The book offers an original and necessary perspective on the fate of the realist novel in an age of collateralized debt obligations, and raises provocative questions about what De Boever calls the 'financialization of the novel itself.'---David Golumbia, author of The Politics of Bitcoin: Software as Right-Wing Extremism

Several thinkers have pointed out that literary realism has historically always been chummy with capitalism; today, capitalism may even have confiscated realism to the extent that capital simply is realism itself, the only realism. Yet Finance Fictions impresses upon its readers that this is not the whole story about literary realism. If the economy is, partly, the stuff of fictions, then it is only as fiction that literature will be equal to the task of not only capturing but of challenging the logic of financial capitalism and its psychotic consequences. - Los Angeles Review of Books

In his new book, Finance Fictions: Realism and Psychosis in a Time of Economic Crisis, Arne De Boever asks whether and how an economic reality that seems to defy representation can be captured by realist fiction... His answer is that the only realism able to represent contemporary finance is a realism of psychosis. - Politics/Letters

Finance Fictions believes steadfastly in description, and its insistence that literature (and literary critics) can explain "what is going on" offers a useful rebuttal to the familiar bromide that the most we can know about late capitalism is that it is hard to know anything about it.---Annie McClanahan, author of Dead Pledges: Debt, Crisis, and Twenty-First Century Culture, Critical Inquiry

Finance Fictions is a very strong, very well-written book that overflows with ideas. De Boever weaves together at least three different disciplines, which makes the book difficult to place. That’s not a criticism, but a compliment! At times reminiscent of work by Jack Halberstam and Mark Fisher, the book is bound to frustrate narrowly empirical sociological or economic approaches, in part because it takes its lead from literature and art to think finance differently. For a book that is focused on traditional media, it develops a highly contemporary critical imagination.---Geert Lovink and Patricia de Vries, Institute of Network Cultures,

By (author) Arne De Boever
Arne De Boever is Faculty in the School of Critical Studies and Director of the Aesthetics and Politics program at the California Institute of the Arts. He is the author of States of Exception in the Contemporary Novel (2012), Narrative Care (2013), and Plastic Sovereignties (2016).