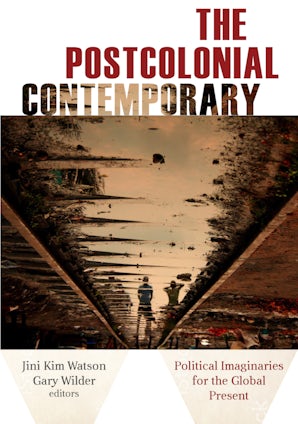 This volume invokes the “postcolonial contemporary” in order to recognize and reflect upon the emphatically postcolonial character of the contemporary conjuncture, as well as to inquire into whether postcolonial criticism can adequately grasp it. Neither simply for nor against postcolonialism, the volume seeks to cut across this false alternative, and to think with postcolonial theory about political contemporaneity.

Many of the most influential frameworks of postcolonial theory were developed during the 1970s and 1990s, during what we may now recognize as the twilight of the postwar period. If forms of capitalist imperialism are entering into new configurations of neoliberal privatization, wars-without-end, xenophobic nationalism and unsustainable extraction, what aspects of postcolonial inquiry must be reworked or revised in order to grasp our political present?

In twelve essays that draw from a number of disciplines—history, anthropology, literature, geography, indigenous studies— and regional locations (the Black Atlantic, South Africa, South Asia, East Asia, Australia, Argentina) The Postcolonial Contemporary seeks to move beyond the habitual oppositions that have often characterized the field, such as universal vs. particular; Marxism vs. postcolonialism; and politics vs. culture. These essays signal an attempt to reckon with new and persisting postcolonial predicaments and do so under four inter-related analytics: Postcolonial Temporality; Deprovincializing the Global South; Beyond Marxism versus Postcolonial Studies; and Postcolonial Spatiality and New Political Imaginaries.

The Postcolonial Contemporary is without doubt the most comprehensive, engaging, and provocative reflection on the status of the postcolonial thinking and the crisis of the present. Informed by sophisticated theoretical thinking and a solid grasp of colonial and postcolonial history, this book will serve as a model for how collective conversations and scholarly debates can intervene in the politics of an unsettled moment.---Simon Gikandi, Princeton University