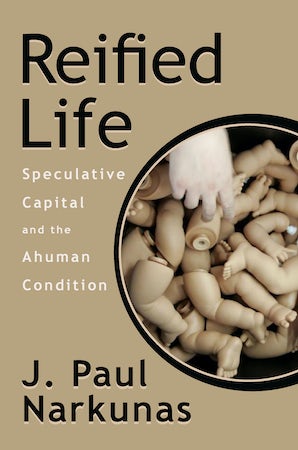 Speculative Capital and the Ahuman Condition

Even as the 2008 economic crisis solidified the dominion of neoliberal and financial capital to organize human societies much to the detriment of the world’s populations, important questions remain. Among them, what forms of life are free and what forms are perceived legally and economically as surplus? Which of them, human and otherwise, are most expendable?

Reified Life theorizes the dangerous social implications of a future where human agency is secondary to algorithmic processes, digital protocols, speculative financial instruments, and nonhuman market-based technological forces. Employing new readings of Deleuze, Guattari, Foucault, Marx, Gramsci and others, J. Paul Narkunas contends that it is premature to speak of a posthuman or inhuman future, or to employ any sort of “ism,” given how dynamic and contingent human practices and their material figurations can be. Over several chapters he diagnoses the rise of “market humans,” the instrumentalization of culture to decide the life worth living along utilitarian categories, as well as the varied ways in which discourses of human rights and humanitarianism actually throw members of the species– refugees, for instance – outside the human order.

To combat this, Reified Life argues against posthumanist calls to abandon humanism, proposing instead the category of the ahuman. Doing so offers us a way to think alongside the human, and to argue for the value of speculative fiction as a critical mechanism for envisioning alternative futures and freedoms from the domineering forces of speculative capital, whose own fictions have become our realities. To that end, Narkunas provides a novel interpretation of the post-anthropocentric turn in the humanities by linking the diminished centrality of humanism to the waning dominion of nation-states over their populations and the intensification of financial capitalism, which reconfigures politics along economic categories of risk management.

Reified Life brilliantly brings together seemingly opposing strands of contemporary theory: Marxist accounts of neoliberalism and financialization on the one hand and posthumanist accounts of the decentering of human life on the other. Rather than demonstrating these methodologies as incompatible, Narkunas reveals their intimacy. This intimacy is organized around a new kind of reification, one that produces the ahuman. A necessary read.---Christopher Breu, author of Insistence of the Material: Literature in the Age of Biopolitics

Introduction: Humanisms, Posthumanisms, and their Discontents

Chapter 2: Utilitarian Humanism: Culture in the Service of Regulating “We Other Humans”

Chapter 3: The Hedge Fund of Reality: Ontology and Financial Derivatives

Chapter 4: Human Rights and States of Emergency: Humanitarians and Governmentality

Chapter 7: Between Words, Numbers, and Things: Transgenics and Other Objects of Life in Margaret Atwood’s MaddAddams