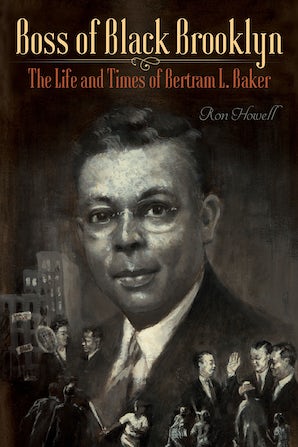 Boss of Black Brooklyn presents a riveting and untold story about the struggles and achievements of the first black person to hold public office in Brooklyn. Bertram L. Baker immigrated to the United States from the Caribbean island of Nevis in 1915. Three decades later, he was elected to the New York state legislature, representing the Bedford Stuyvesant section. A pioneer and a giant, Baker has a story that is finally revealed in intimate and honest detail by his grandson Ron Howell.

Boss of Black Brooklyn begins with the tale of one man’s rise to prominence in a fascinating era of black American history, a time when thousands of West Indian families began leaving their native islands in the Caribbean and settling in New York City. In 1948, Bert Baker was elected to the New York state assembly, representing the growing central Brooklyn neighborhood of Bedford Stuyvesant. Baker loved telling his fellow legislators that only one other Nevisian had ever served in the state assembly. That was Alexander Hamilton, the founding father. Making his own mark on modern history, Baker pushed through one of the nation’s first bills outlawing discrimination in the sale or rental of housing. Also, for thirty years, from 1936 to 1966, he led the all-black American Tennis Association, as its executive secretary. In that capacity he successfully negotiated with white tennis administrators, getting them to accept Althea Gibson into their competitions. Gibson then made history as the first black champion of professional tennis. Yet, after all of Baker’s wonderful achievements, little has been written to document his role in black history.

Baker represents a remarkable turning point in the evolution of modern New York City. In the 1940s, when he won his seat in the New York state assembly, blacks made up only 4 percent of the population of Brooklyn. Today they make up a third of the population, and there are scores of black elected officials. Yet Brooklyn, often called the capital of the Black Diaspora, is a capital under siege. Developers and realtors seeking to gentrify the borough are all but conspiring to push blacks out of the city. A very important and long-overdue book, Boss of Black Brooklyn not only explores black politics and black organizations but also penetrates Baker’s inner life and reveals themes that resonate today: black fatherhood, relations between black men and black women, faithfulness to place and ancestry. Bertram L. Baker’s story has receded into the shadows of time, but Boss of Black Brooklyn recaptures it and inspires us to learn from it.

Authors & Distributors
Ron Howell is a journalist who has written extensively about the Caribbean, Latin America, and New York City. He is an Associate Professor of Journalism at Brooklyn College and author of One Hundred Jobs: A Panorama of Work in the American City.
Reviews

Bertram L. Baker could not have had a better biographer than Ron Howell, a gifted journalist and truth seeker. Howell’s mesmerizing description of his grandfather’s life and career also paints an indispensable portrait an entire borough, city, and nation. Following in the footsteps of another politician from Nevis—Founding Father Alexander Hamilton—Bertram L. Baker was a pioneer whose untold personal and political story is brilliantly depicted by a virtuoso and gifted writer who is well suited to revive him for all of us.

Crucial reading for anyone interested in the political history of New York, The Boss of Black Brooklyn provides us with a deep understanding of ethnic and racial urban politics of the early and mid-twentieth century. Howell skillfully traces the life of Brooklyn’s first black elected official following Bertram Baker’s start in politics, to his election to the New York State Assembly, to his appointment as chairman of the State Assembly’s Education Committee, Waiting for Stuyvesant. An inspiration for the next generation of black politicians.

“[A] valuable addition to New York history, Howell, a former reporter for the Baltimore Sun, writes about his grandfather Bertram L. Baker (1898–1985), the first black person elected (in 1948) to represent Brooklyn in the New York state legislature. . . The author paints a complex portrait of a young, ambitious immigrant, influenced by Booker T. Washington’s political moderation, who worked to pass antidiscrimination laws, including the 1955 Metcalf-Baker Act, which made housing discrimination illegal. By the time Baker retired in 1970, he had served as assembly majority whip, been a key member of the American Tennis Association (which was instrumental in black tennis legend Althea Gibson’s career), and paved the way for future African-American politicians, including New York City mayor David Dinkins and representatives Charles Rangel and Shirley Chisholm. - Publishers Weekly

Introduction: An Ancestor Speaks from Beyond 1

1 The Lasting Anger of an Abandoned Son 10

3 Searching for a Band of Brothers 44

5 The American Tennis Association as a Brotherhood/Sisterhood 83

6 Climbing the Ladder to Elective Office 91

10 Irene, in the End, Became His Connection to Home and Mother 149

11 Author Commentary. Downtown Brooklyn: Soul of the Boss, Soul of a People 155

12 Author Commentary. My Other Grandfather, a Priest and Writer I Hardly Knew 159

By (author) Ron Howell
Ron Howell is a journalist who has written extensively about the Caribbean, Latin America, and New York City. He is an Associate Professor of Journalism at Brooklyn College and author of One Hundred Jobs: A Panorama of Work in the American City.