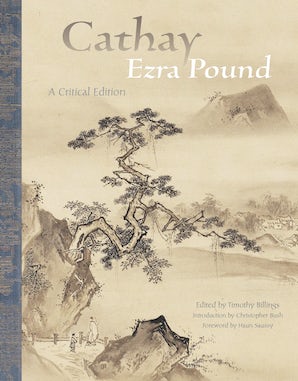 Ezra Pound’s Cathay (1915) is a masterpiece both of modernism and of world literature. The muscular precision of images that mark Pound’s translations helped establish a modern style for American literature, at the same time creating a thirst for classical Chinese poetry in English. Pound’s dynamic free-verse translations in a modern idiom formed the basis for T.S. Eliot’s famous claim that Pound was the “inventor of Chinese poetry for our time.” Yet Pound achieved this feat without knowing any Chinese, relying instead on word-for-word “cribs” left by the Orientalist Ernest Fenollosa, whose notebooks reveal a remarkable story of sustained cultural exchange.

This fully annotated critical edition focuses on Pound’s astonishing translations without forgetting that the original Chinese poems are masterpieces in their own right. On the one hand, the presentation of all that went into the final Cathay makes it possible for the first time to appreciate the magnitude and the nuances of Pound’s poetic art. At the same time, by bringing the final text together with the Chinese and Old English poems it claims to translate, as well as the manuscript traces of Pound's Japanese and American interlocutors, the volume also recovers practices of poetic circulation, resituating a Modernist classic as a work of world literature.

The Pound text and its intertexts are presented with care, clarity, and visual elegance. By providing the first accurate and unabridged transcriptions of Fenollosa’s notebooks, along with carefully edited Chinese texts, the volume makes it possible to trace the movements of poetic ideas and poetic expression as they veer toward and away from Pound’s creations. In supplying the full Fenollosa texts, the volume overturns decades of scholarship that has mystified Pound’s translation process as a kind of “clairvoyance,” displaying instead the impressive amount of sinological learning preserved in Fenollosa’s hard-to-read notebooks and by detailing every deviation from the probable sense of the originals. The edition also supplies exhaustive historical, critical, and textual notes, clarifying points that have sometimes lent obscurity to Pound’s poems and making the process of translation visible even for readers with no knowledge of Chinese.

Cathay: A Critical Edition includes the original fourteen Chinese translations as well as Pound’s unique version of “The Seafarer,” which is fully annotated alongside its Anglo-Saxon source. Also included are Pound’s fifteen additional Chinese translations from Lustra and other contemporary publications, his essay “Chinese Poetry” (1919), a substantial textual Introduction, and original essays by Christopher Bush and Haun Saussy on international modernism, the mediation of Japan, and translation.

The meticulous treatment and analysis of the texts for this landmark edition will forever change how readers view Pound’s “Chinese” poems. In addition to discoveries that permanently alter the scholarly record and force us to revise a number of critical commonplaces, the critical apparatus allows readers to make fresh discoveries by making available the specific networks through which poetic expression moved among hands, languages, and media.

Ultimately, this edition not only enables us more fully to appreciate a canonical work of Modernism but also resituates the art of Pound’s translations by recovering the historical circulations that went into the making of a multiply authored and intrinsically hybrid masterpiece.

Timothy Billings has given us a stunning, masterful edition of a book that reinvented two worlds and made modern poetry possible.---William Logan, The New Criterion

A miracle of poetic reincarnation, Ezra Pound's Cathay finally gets a comprehensive and thorough treatment in this critical edition. A marvel of scholarship that will be required reading for all students of poetry.---Yunte Huang, author of Inseparable: The Original Siamese Twins and Their Rendezvous with American History

A feat of archival scholarship and patient deciphering. Cathay emerges from this critical edition not as the work of a single man, but as a multiply authored enterprise, animated by the erudition of Japanese professors Mori Kainan and Ariga Nagao; the notes of Ernest Fenollosa; and the chutzpah of a young Ezra Pound. Pairing Pound’s compositions with the cribs he used and the Chinese originals he couldn’t read, Timothy Billings makes available, for the first time, the layer upon layer of mediation that went into this collective masterpiece, tracing a conversational arc that extends from the Bronze Age to the twentieth century.---Wai Chee Dimock, Yale University

This is an extraordinary book. Not just because of Pound’s poetry, whose verbal force still resonates with us today, but because, as an edition, it puts us face to face with the possibility of an interpretation that knows everything it needs to know. This is a book for teaching, for learning, and finally, for reading for pleasure—the pleasure of the poems, yes, and the pleasure of seeing in the poems the complex linguistic and conceptual histories, and accidents, that made them what they are today.---Eric Hayot, Pennsylvania State University

An astounding work of scholarship that lays to rest at long last the myths and muddles surrounding Ezra Pound’s ‘Chinese’ poems. Billings’s painstaking erudition brilliantly illuminates just how collective poetic creation can be. Of great relevance to students of modern poetry and to all those with interests in transmission, translation studies, and cultural appropriation. I cannot recommend this beautifully published book too highly.---David Bellos, Princeton University

Cathay has, in a word, become a part of world literature. . . . If Pound’s translations are in many respects mistaken, they are among the most generative mistakes in world literary history. . . . Historically the poems of Cathay were already links in a chain of translation (or ‘translation’) practices by the time Pound got to them. Rather than understanding this as one more degree of inauthenticity, we might think of Fenollosa and then Pound as additional links in the ‘Sinosphere,’ a world of letters in which important aspects of ‘the original’ are bracketed (so that the rest might travel more freely) and texts do not necessarily belong to their sites or moments of origin, but rather to that most exotic and indecipherable time and place in all of history: ‘our time.’---Christopher Bush, from the Introduction

This edition . . . supplements the Cathay long known to readers—an English-language collection with an invisible, remotely guessed-at Chinese background—with an archive of sequential conversations leading us back from the modernism of 1915 to the protest verse of the Bronze Age. . . . The Chinese ‘original,’ the mirror-image of Pound’s Cathay, has long occupied the space of an itch in the minds of poetry-readers. That original is a phantasm: Pound did not of course, translate directly from the Chinese, and what he did versify often corresponds to no Chinese original . . . . The double Cathay given here restores to history the composition process as it passed through a series of authors in a series of languages over some three thousand years; it creates, as a hron, what never was. Let it stand as ‘the invention of Cathay for our time.’---Haun Saussy, from the Foreword

Beginning with the beautifully prepared book itself and the well-written scholarship, there is no end of delight with Cathay: A Critical Edition. It starts with the qualified achievement of Pound's original works, and only increases through each part of the precise and far-reaching research. - American Microreviews & Interviews

This critical edition will be indispensable for the discussion of Pound’s early relation to China, and not least for our understanding of how Pound worked on his translations. - Textual Cultures

Introduction: From the Decipherings
Christopher Bush

Cathay (1915)
Ezra Pound
Front Matter to Cathay
"Song of the Bowmen of Shu"
"The Beautiful Toilet"
"The River Song"
"The River Merchant's Wife: A Letter"
"The Jewel Stairs' Grievance"
"Poem by the Bridge at Ten-shin"
"Lament of the Frontier Guard"
"Exile's Letter"
"The Seafarer"
"Light rain is on the light dust"
"Separation on the River Kiang"
"Taking Leave of a Friend"
"Leave-Taking Near Shoku"
"The City of Choan"
"South-Folk in Cold Country"
Back matter to Cathay

Lustra (1916): The Chinese Poems
Ezra Pound
Additions to Cathay
"Sennin Poem by Kakuhaku"
"A Ballad of the Mulberry Road"
"Old Idea of Choan by Rosoriu"
"To-Em-Mei's 'The Unmoving Cloud'"

Edited: Timothy Billings
Timothy Billings is Professor of English and American Literatures at Middlebury College. With Christopher Bush, he edited and translated Victor Segalen’s Stèles / 古今碑綠 (Wesleyan, 2007), which won the Aldo and Jean Scaglione Prize for Best Translation of a Literary Work. He has also edited and translated Matteo Ricci’s On Friendship: One Hundred Maxims for a Chinese Prince (Columbia, 2009) and is the editor of Shakespeare’s Love’s Labour’s Lost (Internet Shakespeare Editions, University of Victoria).