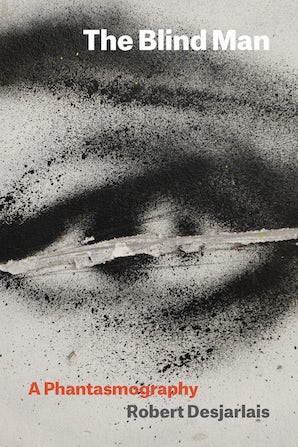 The Blind Man: A Phantasmography examines the complicated forces of perception, imagination, and phantasms of encounter in the contemporary world. In considering photographs he took while he was traveling in France, anthropologist and writer Robert Desjarlais reflects on a few pictures that show the features of a man, apparently blind, who begs for money at a religious site in Paris, frequented by tourists. In perceiving this stranger and the images his appearance projects, he begins to imagine what this man’s life is like and how he perceives the world around him.

Written in journal form, the book narrates Desjarlais’s pursuit of the man portrayed in the photographs. He travels to Paris and tries to meet with him. Eventually, Desjarlais becomes unsure as to what he sees, hears, or remembers. Through these interpretive dilemmas he senses the complexities of perception, where all is multiple, shifting, spectral, a surge of phantasms in which the actual and the imagined are endlessly blurred and intertwined. His mind shifts from thinking about photographs and images to being fixed on the visceral force of apparitions. His own vision is affected in a troubling way.

Composed of an intricate weave of text and image, The Blind Man attends to pressing issues in contemporary life: the fraught dimensions of photographic capture; encounters with others and alterity; the politics of looking; media images of violence and abjection; and the nature of fantasy and imaginative construal. Through a wide-ranging inquiry into histories of imagination, Desjarlais inscribes the need for a “phantasmography”—a writing of phantasms, a graphic inscription of the flows and currents of fantasy and fabulation.

“Emerging from an unknown body, enthralling images, and lacerating silences, The Blind Man is written with the force of literature. Desjarlais’s fierce masterpiece reawakens anthropology’s sense of wonder with the affective, spectral nature of worldly encounters. A transformational book.”---João Biehl, Princeton University

“Desjarlais’s Blind Man is a compelling read, with thought-provoking insights on the nature of photography and visuality. Written as though a diary or journal, the book combines extended visual analysis of personal photographs with keen observations about the slipperiness of perception and identity and the notion of the other. Original and stimulating in presentation, the book is also well-written, poetic, and often gripping. Desjarlais offers fresh insights on the ontology of the photograph in relation to our identity, and to that of the people we capture in the photographs we take.”---Frederick Gross, author of Diane Arbus’s 1960s

Photography tears the subject from itself 1

The delirium of images 95

The collector of eyes 163

By (author) Robert Desjarlais
Robert Desjarlais is Professor of Anthropology at Sarah Lawrence College. He is the author of several books, including Subject to Death: Life and Loss in a Buddhist World (University of California Press, 2016); The Blind Man: A Phantasmography (Fordham University Press, 2019); and Traces of Violence: Writings on the Disaster in Paris, France (University of California Press, 2022; coauthored with Khalil Habrih).