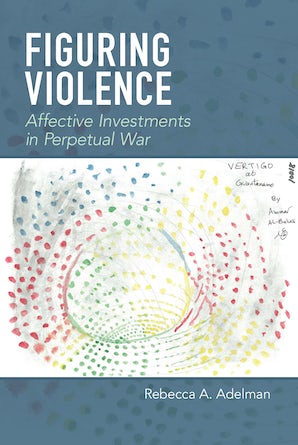 By (author) Rebecca A. Adelman

In the United States, the early years of the war on terror were marked by the primacy of affects like fear and insecurity. These aligned neatly with the state’s drive toward intensive securitization and an aggressive foreign policy. But for the broader citizenry, such affects were tolerable at best and unbearable at worst; they were not sustainable. Figuring Violence catalogs the affects that define the latter stages of this war and the imaginative work that underpins them. These affects—apprehension, affection, admiration, gratitude, pity, and righteous anger—are far more subtle and durable than their predecessors, rendering them deeply compatible with the ambitions of a state embroiling itself in a perpetual and unwinnable war.

Surveying the cultural landscape of this sprawling conflict, Figuring Violence reveals the varied mechanisms by which these affects have been militarized. Rebecca Adelman tracks their convergences around six types of beings: civilian children, military children, military spouses, veterans with PTSD and TBI, Guantánamo detainees, and military dogs. All of these groups have become preferred objects of sentiment in wartime public culture, but they also have in common their status as political subjects who are partially or fully unknowable. They become visible to outsiders through a range of mediated and imaginative practices that are ostensibly motivated by concern or compassion. However, these practices actually function to reduce these beings to abstracted figures, silencing their political subjectivities and obscuring their suffering. As a result, they are erased and rendered hypervisible at once. Figuring Violence demonstrates that this dynamic ultimately propagates the very militarism that begets their victimization.

This timely, sprightly, and elegantly written monograph explores how the imagination and affect converge and circulate to generate a militarized affective economy. Though her strategic use of affect theory, Adelman provides insights into emotional and interpersonal phenomena that political theorists tend to ignore. In so doing, Adelman produces a theoretical account of how affects have shaped and sustained the U.S. public’s responses to persons in the military and she reflects on the ethical and political intricacies of these responses. Adelman attends in particular to the imaginings of citizens, the nation, and the state so as to develop a more precise account of the affective and imaginative mechanisms by which militarization results from this interaction.---Don Pease, Dartmouth College,

Figuring Violence is a challenging, highly original contribution to critical research on affect and the visual culture of militarization. Adelman vividly analyzes the people and nonhuman animals around whom militarized affect gets assembled in contemporary U.S. culture, scaling the fine granularities of militarized feeling and the larger imaginaries of wartime mediation, and their devastating consequences. This book calls us in and challenges us to take on the struggle against militarized violence and its powerful structures of feeling. It is a critical read for anyone willing to ‘stay with the trouble’ of doing the emotional and political work that de-militarization requires of us.---Carrie Rentschler, McGill University,

Deft in theory, nuanced in argument and rich in detail, Figuring Violence is one of those rare books that feels important from the first page and it will surely earn a wider readership across the study of affect, militarism, culture and everyday life in America. - Theory & Event

On the Cover Image: “Vertigo at Guantanamo” ix

Conclusion: A Radical and Unsentimental Attention 245

By (author) Rebecca A. Adelman
Rebecca A. Adelman is Associate Professor of Media and Communication Studies at the University of Maryland, Baltimore County. She is the author of Beyond the Checkpoint: Visual Practices in America’s Global War on Terror.