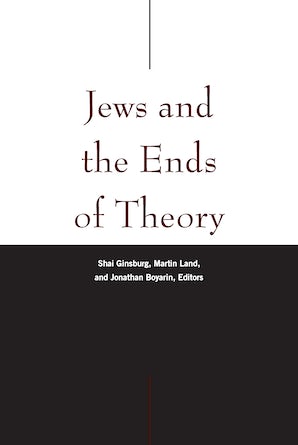 Theory, as it’s happened across the humanities, has often been coded as “Jewish.” This collection of essays seeks to move past explanations for this understanding that rely on the self-evident (the historical centrality of Jews to the rise of Critical Theory with the Frankfurt School) or stereotypical (psychoanalysis as the “Jewish Science”) in order to show how certain problematics of modern Jewishness enrich theory.

In the range of violence and agency that attend the appellation “Jew,” depending on how, where, and by whom it’s uttered, we can see that Jewishness is a rhetorical as much as a sociological fact, and that its rhetorical and sociological aspects, while linked, are not identical. Attention to this disjuncture helps to elucidate the questions of power, subjectivity, identity, figuration, language, and relation that modern theory has grappled with. These questions in turn implicate geopolitical issues such as the relation of a people to a state and the violence done in the name of simplistic identitarian ideologies.

Clarifying a situation where “the Jew” is not readily or unproblematically legible, the editors propose what they call “spectral reading,” a way to understand Jewishness as a fluid and rhetorical presence. While not divorced from sociological facts, this spectral reading works in concert with contemporary theory to mediate pessimistic and utopian impulses, experiences, and realities.

Martin Land (Edited By)
Martin Land is Senior Lecturer in the Department of Computer Science at Hadassah College and the Open University of Israel.

Jonathan Boyarin (Edited By)
Jonathan Boyarin is Diann G. and Thomas A. Mann Professor of Modern Jewish Studies in the Departments of Anthropology and Near Eastern Studies at Cornell University.

2. The Palestinian Nakba and the Arab-Jewish Melancholy: An Essay on Sovereignty and Translation
Yehouda Shenhav, 48

4. The Last Jewish Intellectual: Derrida and His Literary Betrayal of Levinas
Sarah Hammerschlag, 88

8. Old Testament Realism in the Writings of Erich Auerbach
James I. Porter, 187

9. Buber versus Scholem and the Figure of the Hasidic Jew: A Literary Debate between Two Political Theologies
Hannan Hever, 225

10. Against the “Attack on Linking”: Rearticulating the “Jewish Intellectual” for Today
Martin Land, 263

11. Recovering Futurity: Theorizing the End and the End of Theory
Elliot R. Wolfson, 293

Edited: Jonathan Boyarin
Jonathan Boyarin is Mann Professor of Modern Jewish Studies at Cornell University. His books include Jewish Families (Rutgers, 2013), Mornings at the Stanton Street Shul: A Lower East Side Summer (Fordham, 2011), and The Unconverted Self: Jews, Indians, and the Identity of Christian Europe (Chicago, 2009).

Contributions: Svetlana Boym
Svetlana Boyom of blessed memory was the Curt Hugo Reisinger Professor of Slavic Languages and Literatures and Comparative Literature at Harvard University. An essayist, photographer, novelist, and playwright as well as the author of myriad scholarly articles, Dr. Boym was best known to a general readership for The Future of Nostalgia, her widely praised book of 2001 (Basic Books). In that work, which ranges meditatively over philosophy, history, art, literature, and the experience of displaced persons, she explored the web of memory and mythologizing that underpins the human longing for vanished worlds. In her 2010 Another Freedom (the University of Chicago Press), she similarly explores the notion of “freedom.” Her preoccupation with these subjects was rooted partly in her own history as a Jewish émigré from the former Soviet Union.

Contributions: Andrew Bush
Andrew Bush is a professor of Hispanic studies at Vassar College. He earned his PhD in comparative literature from Yale University in 1983. He has published articles on Golden Age Spanish literature, twentieth-century women authors in Spain, and twentieth-century Spanish American literature. He is the author of The Routes of Modernity: Spanish American Poetry from the Early Eighteenth to the Mid-Nineteenth Century, from Bucknell University Press (2002), and Jewish Studies: A Theoretical Introduction published from Rutgers University Press (2011) in the Key Words in Jewish Studies Series, of which he is a co-editor. He was among a faculty group that designed Jewish studies program for the college, and he served as the program’s first director. He has taught courses on Jewish textuality, the Holocaust, the history of German Jewish culture, and seminars on Jewish culture in Europe and the Americas between the two world wars.

Contributions: Jay Geller
Jay Geller is Associate Professor of Modern Jewish Culture at Vanderbilt Divinity School and the Vanderbilt University Jewish Studies Program. He is the author of On Freud’s Jewish Body: Mitigating Circumcisions and The Other Jewish Question: Identifying the Jew and Making Sense of Modernity, both published by Fordham.

Contributions: Sarah Hammerschlag
Sarah Hammerschlag is director of the MA program and an associate professor of religion and literature, philosophy of religions, and history of Judaism at the University of Chicago Divinity School. She is the author of The Figural Jew: Politics and Identity in Postwar French Thought (University of Chicago Press, 2010) and Broken Tablets: Levinas, Derrida and the Literary Afterlife of Religion (Columbia University Press, 2016). The Figural Jew received an Honorable Mention for the 2012 Jordan Schnitzer Book Award, given by the Association of Jewish Scholars, and was a finalist for the AAR’s Best First Book in the History of Religions in 2011.

Contributions: Hannan Hever
Hannan Hever is the Jacob and Hilda Blaustein Professor of Judaic Studies and a professor of comparative literature at Yale University. He earned his PhD at the Hebrew University in 1984. In English he published Producing the Modern Hebrew Canon, Nation Building and Minority Discourse (New York University Press, 2002) Nativism, Zionism, and Beyond: Three Essays on Nativist Hebrew Poetry (Syracuse University, 2014); and Suddenly the Sight of War: Violence and Nationalism in the Hebrew Poetry of the 1940s (Stanford University Press, 2017).

Contributions: Martin Jay
Martin Jay is the Sidney Hellman Ehrman Professor of History at the University of California, Berkeley. He is an intellectual historian whose research has included the critical theory of the Frankfurt School, social theory, cultural criticism, and historiography. His many books include most recently Songs of Experience: Modern American and European Variations on a Universal Theme (2004); The Virtues of Mendacity: On Lying in Politics (2010); Essays from the Edge: Parerga and Paralipomena (2011); and Reason after Its Eclipse: On Late Critical Theory (2016).

Contributions: Martin Land
Martin Land is Senior Lecturer in the Department of Computer Science at Hadassah College and the Open University of Israel.

Contributions: James I. Porter
James I. Porter is Chancellor’s Professor in the Departments of Rhetoric and Classics at the University of California at Berkeley. He began teaching at the University of Michigan in Classics and Comparative Literature (1986–2007), and then moved to UC Irvine, Classics and Comparative Literature (2007–2015), where he was director of Critical Theory from 2014 to 2015. He has held visiting professorships at Princeton and Bristol University (UK). His most recent book, The Sublime in Antiquity (Cambridge, 2016), was awarded the C. J. Goodwin Award of Merit by the Society for Classical Studies in 2017.

Contributions: Yehouda Shenhav
Yehouda Shenhav (PhD, Stanford University, 1985) is a professor of sociology at Tel-Aviv University. His book on the area of history of management, Manufacturing Rationality: The Engineering Foundations of the Managerial Revolution, was published by Oxford University Press in 1999. His main work in the area of nationalism, ethnicity, and religion was published in The Arab Jews: A Postcolonial Reading of Nationalism, Ethnicity, and Religion (Stanford University Press, 2006). His views on the Israeli- Palestinian conflict appeared in Beyond the Two-State Solution: A Jewish Political Essay (Polity Press, 2012).

Elliot R. Wolfson holds the Marsha and Jay Glazer Endowed Chair in Jewish Studies in
the Department of Religious Studies, University of California, Santa Barbara. His recent books include Giving beyond the Gift : Apophasis and Overcoming Theomania (2014), A Dream Interpreted within a Dream: Oneiropoiesis and the Prism of Imagination (2011), and Open Secret: Postmessianic Messianism and the Mystical Revision of Menahem Mendel Schneerson (2009). 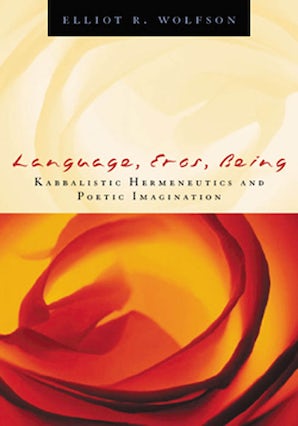 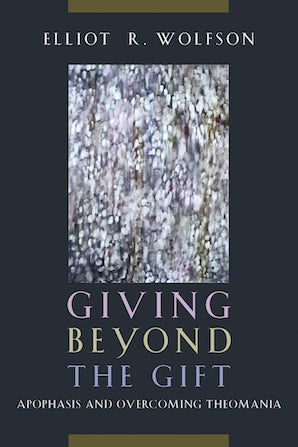