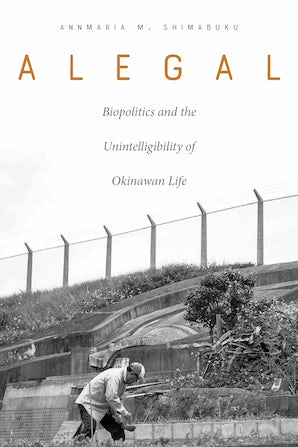 Okinawan life, at the crossroads of American militarism and Japanese capitalism, embodies a fundamental contradiction to the myth of the monoethnic state. Suspended in a state of exception, Okinawans have never been officially classified as colonial subjects of the Japanese empire or the United States, nor have they ever been treated as equal citizens of Japan. As a result, they live amid one of the densest concentrations of U.S. military bases in the world. By bringing Foucauldian biopolitics into conversation with Japanese Marxian theorizations of capitalism, Alegal uncovers Japan’s determination to protect its middle class from the racialized sexual contact around its mainland bases by displacing them onto Okinawa, while simultaneously upholding Okinawa as a symbol of the infringement of Japanese sovereignty figured in terms of a patriarchal monoethnic state.

This symbolism, however, has provoked ambivalence within Okinawa. In base towns that facilitated encounters between G.I.s and Okinawan women, the racial politics of the United States collided with the postcolonial politics of the Asia Pacific. Through close readings of poetry, reportage, film, and memoir on base-town life since 1945, Shimabuku traces a continuing failure to “become Japanese.” What she discerns instead is a complex politics surrounding sex work, tipping with volatility along the razor’s edge between insurgency and collaboration. At stake in sovereign power’s attempt to secure Okinawa as a military fortress was the need to contain alegality itself—that is, a life force irreducible to the legal order. If biopolitics is the state’s attempt to monopolize life, then Alegal is a story about how borderland actors reclaimed the power of life for themselves.

In addition to scholars of Japan and Okinawa, this book is essential reading for anyone interested in postcolonialism, militarism, mixed-race studies, gender and sexuality, or the production of sovereignty in the modern world.

Note on Translations and Romanizations xvii