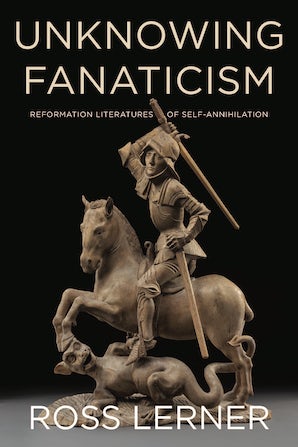 We may think we know what defines religious fanaticism: violent action undertaken with dogmatic certainty. But the term fanatic, from the European Reformation to today, has never been a stable one. Then and now it has been reductively defined to justify state violence and to delegitimize alternative sources of authority. Unknowing Fanaticism rejects the simplified binary of fanatical religion and rational politics, turning to Renaissance literature to demonstrate that fanaticism was integral to how both modern politics and poetics developed, from the German Peasants’ Revolt to the English Civil War.

The book traces two entangled approaches to fanaticism in this long Reformation moment: the targeting of it as an extreme political threat and the engagement with it as a deep epistemological and poetic problem. In the first, thinkers of modernity from Martin Luther to Thomas Hobbes and John Locke positioned themselves against fanaticism to pathologize rebellion and abet theological and political control. In the second, which arose alongside and often in response to the first, the poets of fanaticism investigated the link between fanatical self-annihilation—the process by which one could become a vessel for divine violence—and the practices of writing poetry. Edmund Spenser, John Donne, and John Milton recognized in the fanatic’s claim to be a passive instrument of God their own incapacity to know and depict the origins of fanaticism. Yet this crisis of unknowing was a productive one. It led these writers to experiment with poetic techniques that would allow them to address fanaticism’s tendency to unsettle the boundaries between human and divine agency and between individual and collective bodies. These poets demand a new critical method, which this book attempts to model: a historically-minded and politicized formalism that can attend to the complexity of the poetic encounter with fanaticism.

Lerner presents a thoughtful and penetrating study of how England’s major seventeenth-century writers came to terms with a tradition of prophecy, messianism, and divine grace that can be utopian and critical, but also militant and destructive. In gesturing toward twenty-first century politics Lerner never chains his analyses to the contemporary situation but instead gives us tools to think about jihadism, right wing terror, fundamentalism, and liberation theology.---Julia Reinhard Lupton, University of California, Irvine

A nuanced and compelling exploration of the poetics of fanaticism in the long Reformation, Lerner’s book will also enrich contemporary debates on intransigence, self-abnegation and divine violence as political forms.---Alberto Toscano, author of Fanaticism: On the Uses of an Idea

Unknowing Fanaticism is a fascinating exploration of the epistemological, ethical, and aesthetic complexities of fanaticism in Reformation literature... Lerner’s attention to the complex portrayals of self-annihilation in Reformation literature serves as a valuable tool for any wishing to better understand this important aspect of religious radicalism in the early modern era. In short, Unknowing Fanaticism is a captivating and rigorous study concerned about questions of agency, authority, and poetic conflict. - Journal of British Studies

Introduction. Receiving Divine Action: Fanaticism and Form in the Reformation 1