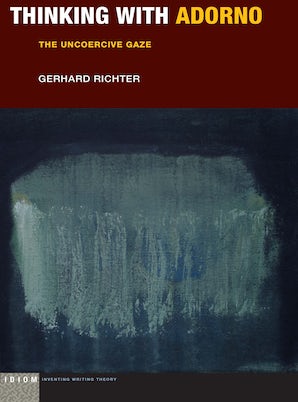 What Theodor W. Adorno says cannot be separated from how he says it. By the same token, what he thinks cannot be isolated from how he thinks it. The central aim of Richter’s book is to examine how these basic yet far-reaching assumptions teach us to think with Adorno—both alongside him and in relation to his diverse contexts and constellations. These contexts and constellations range from aesthetic theory to political critique, from the problem of judgment to the difficulty of inheriting a tradition, from the primacy of the object to the question of how to lead a right life within a wrong one.

Richter vividly shows how Adorno’s highly suggestive—yet often overlooked—concept of the “uncoercive gaze” designates a specific kind of comportment in relation to an object of critical analysis: It moves close to the object and tarries with it while struggling to decipher the singularities and non-identities that are lodged within it, whether the object is an idea, a thought, a concept, a text, a work of art, an experience, or a problem of political or sociological theory.

Thinking with Adorno’s uncoercive gaze not only means following the fascinating paths of his own work; it also means extending hospitality to the ghostly voices of others. As this book shows, Adorno is best understood as a thinker in dialogue, whether with long-deceased predecessors in the German tradition such as Kant and Hegel, with writers such as Kafka, with contemporaries such as Benjamin and Arendt, or with philosophical voices that succeeded him, such as those of Derrida and Agamben.

The chapters of this book are among the finest I have ever read on Adorno. Their meditative quality draws the reader into deep contemplation of Adorno’s texts. The book provides the reader the chance to reapply Adorno’s arguments on their own terms, thereby ascribing a whole new relevance to his philosophy that escapes the usual teleology of post-1945 history.---Daniel Purdy, Pennsylvania State University

Richter pushes Adorno scholarship to a new level... Thinking with Adorno will be of great interest to those working in epistemology, philosophy of history, literary theory, political theory, and cultural studies, particularly those investigating the intersections of politics, art, and history. Highly recommended. - Choice

Introduction: The Art of Reading | 1

3. The Inheritance of the Constellation: Adorno and Hegel | 70

4. Judging by Refraining from Judgment: Adorno’s Artwork and Its Einordnung | 95

5. The Literary Artwork between Word and Concept: Adorno and Agamben Reading Kafka | 115

6. The Artwork without Cardinal Direction: Notes on Orientation in Adorno | 131

Conclusion: A Kind of Leave-Taking | 161

By (author) Gerhard Richter
Gerhard Richter is Professor of German Studies and Comparative Literature at Brown University. His most recent books include Inheriting Walter Benjamin and Afterness: Figures of Following in Modern Thought and Aesthetics.