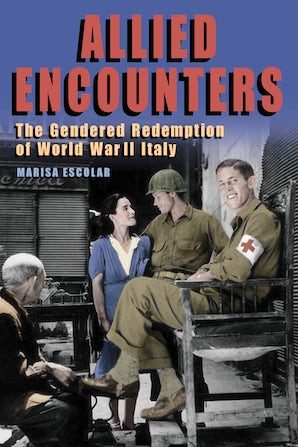 Allied Encounters uniquely explores Anglo-American and Italian literary, cinematic, and military representations of World War II Italy in order to trace, critique, and move beyond the gendered paradigm of redemption that has conditioned understandings of the Allied–Italian encounter.

The arrival of the Allies’ global forces in an Italy torn by civil war brought together populations that had long mythologized one another, yet “liberation” did not prove to be the happy ending touted by official rhetoric. Instead of a “honeymoon,” the Allied–Italian encounter in cities such as Naples and Rome appeared to be a lurid affair, where the black market reigned supreme and prostitution was the norm.

Informed by the historical context as well as by their respective traditions, these texts become more than mirrors of the encounter or generic allegories. Instead, they are sites in which to explore repressed traumas that inform how the occupation unfolded and is remembered, including the Holocaust, the American Civil War, and European colonialism, as well as individual traumatic events like the massacre of the Fosse Ardeatine and the mass civilian rape near Rome by colonial soldiers

Authors & Distributors
Marisa Escolar is Assistant Professor of Italian in the Department of Romance Studies at University of North Carolina, Chapel Hill.
Reviews

Italy-as-whore and Italian whores have populated much of the literature that examines what happened to the country and its inhabitants during the Allied occupation and after the liberation. Allied Encounters asks what the racialized, gendered, and sexualized figures of the novels and films in question communicate to us, beyond the interpretations of the traditional critics who favor the view of Italy as a country that compromised its integrity letting itself to be seduced meretriciously by the political interest of the moment. Distancing itself from the official canon, the author opens up to a discourse that allows a dialogue among the various works, vis-à-vis the literary tradition and the historical background they inhabit. The book is a welcome addition to the Italian scholarship, redressing and re-reading the encounter between the Allied and Italy according to other parameters and against the grain. - Flavia Brizio-Skov, University of Tennessee

1 Redeeming Destination Italy: A Guide to the Occupation of Enemy Territory | 17

2 “Liberated” Rome beyond Redemption: Roberto Rossellini’s
Paisà and Alfred Hayes’s All Thy Conquests and The Girl
on the Via Flaminia | 42

5 Sleights of Hand, Black Skin, and the Redemption of
Curzio Malaparte’s La pelle | 111

By (author) Marisa Escolar
Marisa Escolar is Assistant Professor of Italian in the Department of Romance Studies at University of North Carolina, Chapel Hill.