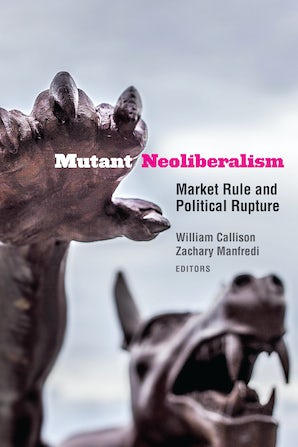 Tales of neoliberalism’s death are serially overstated. Following the financial crisis of 2008, neoliberalism was proclaimed a “zombie,” a disgraced ideology that staggered on like an undead monster. After the political ruptures of 2016, commentators were quick to announce “the end” of neoliberalism yet again, pointing to both the global rise of far-right forces and the reinvigoration of democratic socialist politics. But do new political forces sound neoliberalism’s death knell or will they instead catalyze new mutations in its dynamic development?

Mutant Neoliberalism brings together leading scholars of neoliberalism—political theorists, historians, philosophers, anthropologists and sociologists—to rethink transformations in market rule and their relation to ongoing political ruptures. The chapters show how years of neoliberal governance, policy, and depoliticization created the conditions for thriving reactionary forces, while also reflecting on whether recent trends will challenge, reconfigure, or extend neoliberalism’s reach. The contributors reconsider neoliberalism’s relationship with its assumed adversaries and map mutations in financialized capitalism and governance across time and space—from Europe and the United States to China and India. Taken together, the volume recasts the stakes of contemporary debate and reorients critique and resistance within a rapidly changing landscape.

Authors & Distributors
William Callison (Edited By)
William Callison is Visiting Assistant Professor of Government and Law at Lafayette College. He is co-editor of “Rethinking Sovereignty and Capitalism” (Qui Parle) and of “Europe at a Crossroads” (Near Futures Online, Zone Books).

Zachary Manfredi (Edited By)
Zachary Manfredi is an Equal Justice Works Fellow at the Asylum Seeker Advocacy Project. His recent work has appeared or is forthcoming in Humanity, The New York University Law Review, The Texas Journal of International Law, and Critical Times.

2. The Market’s People: Milton Friedman and the Making of Neoliberal Populism | 61
Sören Brandes

5. Disposing of the Discredited: A European Project | 146
Michel Feher

Contributions: Sören Brandes
Sören Brandes is a research fellow at the International Max Planck Research School (IMPRS) for Moral Economies of Modern Societies at the Max Planck Institute for Human Development in Berlin and a Ph.D. candidate at the Free University Berlin. He is coeditor of a special issue on “Practices of Capitalism” in Mittelweg 36 and has published on the history of neoliberalism and mass media in the United States and the United Kingdom.

Edited: William Callison
William Callison is Visiting Assistant Professor of Government and Law at Lafayette College. He is co-editor of “Rethinking Sovereignty and Capitalism” (Qui Parle) and of “Europe at a Crossroads” (Near Futures Online, Zone Books).

Contributions: Melinda Cooper
Melinda Cooper is Associate Professor in the School of Social and Political Science at the University of Sydney, Australia. Her research focuses on the broad areas of social studies of finance, biomedical economies, neoliberalism, and new social conservatisms. She is author of Life as Surplus: Biotechnology and Capitalism in the Neoliberal Era (University of Washington Press, 2008) and Family Values: Between Neoliberalism and the New Social Conservatism (Zone Books, 2017). She is coeditor, with Martijn Konings, of the Stanford University Press book series Currencies: New Thinking for Financial Times.

Contributions: Julia Elyachar
Julia Elyachar is an Associate Professor of Anthropology at Princeton University and a member of Princeton’s Institute for International and Regional Studies. She is an anthropologist broadly trained in economics, social theory, the history of political and economic thought, Middle Eastern Studies, and the Arabic language. She is author of Markets of Dispossession: NGOs, Economic Development, and the State in Cairo (Duke University Press, 2005), which won the American Ethnological Association’s Sharon Stephens First Book Prize in 2007.

Contributions: Michel Feher
Michel Feher is a philosopher, a founding editor of Zone Books, and the cofounder and president of Cette France-là, Paris, a monitoring group on French immigration policy. He is currently a visiting professor at Goldsmiths, University of London. His publications include Powerless by Design: The Age of the International Community (Duke University Press, 2000), Nongovernmental Politics (Zone Books, 2007), Xénophobie d’en haut: Le choix d’une droite éhontée (La Découverte, 2012), “Europe at a Crossroads” (Near Futures Online, 2016), and Rated Agency: Investee Politics for a Speculative Age (Zone Books, 2018).

Edited: Zachary Manfredi
Zachary Manfredi is an Equal Justice Works Fellow at the Asylum Seeker Advocacy Project. His recent work has appeared or is forthcoming in Humanity, The New York University Law Review, The Texas Journal of International Law, and Critical Times.

Contributions: Megan C. Moodie
Megan C. Moodie is Associate Professor of Anthropology and Affiliated Faculty in Feminist Studies at the University of California, Santa Cruz. Her research focuses on feminist political and legal anthropology, kinship and reproduction, and experimental ethnographic writing in South Asia, East Europe, and the United States. She is author of We Were Adivasis: Aspiration in an Indian Scheduled Tribe (University of Chicago Press, 2015). She is also the curator and editor of the Margaret Mead Journalism Project, a popular-media public anthropology initiative housed at the UCSC Center for Emerging Worlds.

Contributions: Dieter Plehwe
Dieter Plehwe is a Senior Research Fellow in the Department of Inequality and Social Policy at the Berlin Social Science Research Center (WZB). His recent books include Neoliberal Hegemony: A Global Critique (with Walpen, Routledge, 2006); The Road from Mont Pèlerin: The Making of the Neoliberal Thought Collective (with Mirowski, Harvard University Press, 2009); and Liberalism and the Welfare State: Economists and Arguments for the Welfare State (with Backhouse, Bateman, and Nishizawa, Oxford University Press, 2017). His research in the WZB project “Modes of Economic Governance” focuses on European interest groups, think tank networks, and the transformation of transnational governance. He is currently working on an edited volume on neoliberalism with Quinn Slobodian and Philip Mirowski.

Contributions: Lisa Rofel
Lisa Rofel is Professor of Anthropology at the University of California, Santa Cruz. Her publications include Other Modernities: Gendered Yearnings in China after Socialism (University of California Press, 1999) and Desiring China: Experiments in Neoliberalism, Sexuality, and Public Culture (Duke University Press, 2007). Her most recent work, with Sylvia Yanagisako, Fabricating Transnational Capitalism: A Collaborative Ethnography of Italian-Chinese Global Fashion (Duke University Press, 2019) offers an innovative approach to studying the commodity chains of transnational capitalism.

Contributions: Leslie Salzinger
Leslie Salzinger is Associate Professor of Gender and Women’s Studies at the University of California, Berkeley. She is a sociologist and ethnographer who focuses on Latin America, and her research is concerned with gender, capitalism, globalization, and economic sociology. She is the author of the award-winning book Genders in Production: Making Workers in Mexico’s Global Factories (University of California Press, 2003), and is currently working on a book provisionally entitled Model Markets: Peso Dollar Exchange as a Site of Neoliberal Incorporation.

Contributions: Quinn Slobodian
Quinn Slobodian is Associate Professor of History at Wellesley College. His books include Foreign Front: Third World Politics in Sixties West Germany (Duke University Press, 2012), Comrades of Color: East Germany in the Cold War World (Berghahn, 2015), and Globalists: The End of Empire and the Birth of Neoliberalism (Harvard University Press, 2018). He is currently coediting a volume on neoliberalism with Dieter Plehwe and Philip Mirowski.