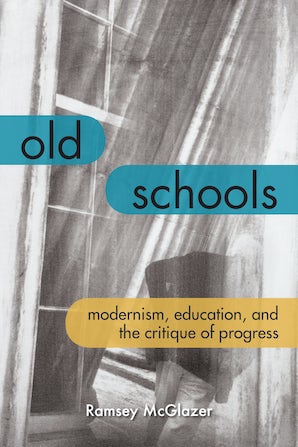 Old Schools marks out a modernist countertradition. The book makes sense of an apparent anachronism in twentieth-century literature and cinema: a fascination with outmoded, paradigmatically pre-modern educational forms that persists long after they are displaced in progressive pedagogical theories.

Advocates of progressive education turned against Latin in particular. The dead language—taught through time-tested means including memorization, recitation, copying out, and other forms of repetition and recall—needed to be updated or eliminated, reformers argued, so that students could breathe free and become modern, achieving a break with convention and constraint.

Yet McGlazer’s remarkable book reminds us that progressive education was championed not only by political progressives, but also by Fascists in Italy, where it was an object of Gramsci’s critique. Building on Gramsci’s pages on the Latin class, McGlazer shows how figures in various cultural vanguards, from Victorian Britain to 1970s Brazil, returned to and reimagined the old school.

Strikingly, the works that McGlazer considers valorize this school’s outmoded techniques even at their most cumbersome and conventional. Like the Latin class to which they return, these works produce constraints that feel limiting but that, by virtue of that limitation, invite valuable resistance. As they turn grammar drills into verse and repetitious lectures into voiceovers, they find unlikely resources for critique in the very practices that progressive reformers sought to clear away.

Registering the past’s persistence even while they respond to the mounting pressures of modernization, writers and filmmakers from Pater to Joyce to Pasolini retain what might look like retrograde attachments—to tradition, transmission, scholastic rites, and repetitive forms. But the counter-progressive pedagogies that they devise repeat the past to increasingly radical effect. Old Schools teaches us that this kind of repetition can enable the change that it might seem to impede.

Here is a wonderfully intelligent and exhilarating book. The chapter on Joyce is a true tour de force. I haven’t read such a smart text in a long time.---Jean-Michel Rabaté, University of Pennsylvania

This is a wonderful, rich, elegant, beautifully written gem of a book. Its impact will be felt from Italian to film studies to queer theory.---John David Rhodes, University of Cambridge

By (author) Ramsey McGlazer
Ramsey McGlazer is Assistant Professor of Critical Theory in the Department of Comparative Literature at the University of California, Berkeley. He is the author of Old Schools: Modernism, Education, and the Critique of Progress.