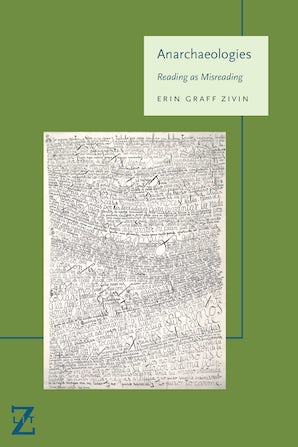 How do we read after the so-called death of literature? If we are to attend to the proclamations that the representational apparatuses of literature and politics are dead, what aesthetic, ethical, and political possibilities remain for us today? Our critical moment, Graff Zivin argues, demands anarchaeological reading: reading for the blind spots, errors, points of opacity or untranslatability in works of philosophy and art.

Rather than applying concepts from philosophy in order to understand or elucidate cultural works, the book exposes works of philosophy, literary theory, narrative, poetry, film, and performance art and activism to one another. Working specifically with art, film, and literature from Argentina (Jorge Luis Borges, Juán José Saer, Ricardo Piglia, César Aira, Albertina Carri, the Internacional Errorista), Graff Zivin allows such thinkers as Levinas, Derrida, Badiou, and Rancière to be inflected by Latin American cultural production. Through these acts of interdiscursive and interdisciplinary (or indisciplinary) exposure, such ethical and political concepts as identification and recognition, decision and event, sovereignty and will, are read as constitutively impossible, erroneous. Rather than weakening either ethics or politics, however, the anarchaeological reading these works stage and demand opens up and radicalizes the possibility of justice.

Anarchaeologies offers inventive and illuminating readings of Latin American and European fiction, film, philosophy, and criticism; the selection of sources is interesting and interdisciplinary, an appealing combination of genres and modes. The book is both highly readable and highly rewarding.---Rei Terada, University of California, Irvine,

Erin Graff Zivin is one of the most accomplished and original scholars in the fields of Latin American literature and Critical Theory today. Anarchaeologies is an extraordinarily relevant theoretical intervention, that argues in favor of a marrano, anarchaeological reading practice invested in guarding and unsettling the ethical demands posed onto us by a wide array of textual formations through its errors, secrets, misunderstandings, zones of opacity, and blind spots. It is also a highly enjoyable read: a book that is well written and argued in spite of the considerable complexity and sophistication of its philosophical arguments.---Mariano Siskind, Harvard University,

Part IV. Political Thinking after Literature
The Metapolitics of Allegory | 107
The Aesthetics and Politics of Error | 121

Part V. Exposure and Indisciplinarity
Toward a Passive University | 139

Afterword: Truth and Error in the Age of Trump | 153

By (author) Erin Graff Zivin
Erin Graff Zivin is Professor of Spanish and Portuguese and of Comparative Literature at the University of Southern California. She is the author of Figurative Inquisitions: Conversion, Torture, and Truth in the Luso-Hispanic Atlantic (Northwestern University Press, 2014, winner of the 2015 Award for Best Book, Latin American Jewish Studies Association) and The Wandering Signifier: Rhetoric of Jewishness in the Latin American Imaginary (Duke University Press, 2008).