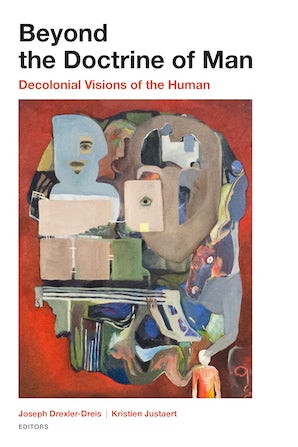 This interdisciplinary work moves from re-articulating the doctrine of man into a re-engagement with Christian theology in order to creatively and imaginatively present the reader with divinity in the flesh. Covering geopolitics and biopolitics and the matter of enfleshed resistance, Beyond the Doctrine of Man offers a challenge to theology from many sides, but a challenge it is meant to rise to, not buckle under. This is a remarkable book offering depth of academic analysis presented in an accessible manner.---Lisa Isherwood

The contributions are deeply insightful, diverse, and serve as a fitting prolegomenon for further examination. - Religious Studies Review

Part I: Sylvia Wynter and the Project of Unsettling Man

1. Where Life Itself Lives
Mayra Rivera | 19

Part II: Religious Cosmologies and the Project of Unsettling Man

5. Nat Turner’s Orientation beyond the Doctrine of Man
Joseph Drexler-Dreis | 113

7. African Humanism: Between the Cosmic and the Terrestrial
Patrice Haynes | 161

Part III: Biopolitics and the Project of Unsettling Man

9. Life beyond the Doctrine of Man: Out of This World with Michel Henry and Radical Queer Theory
Kristien Justaert | 217

Contributions: Rufus Burnett, Jr.
Rufus Burnett is a native of Gulfport, Mississippi, and an assistant professor of systematic theology at Fordham University. He previously taught within the Africana Department and Balfour-Hesburgh Scholars Program at the University of Notre Dame. His area of study focuses on the sonic, spatial, and embodied realities of the Christian imagination. His latest book, Decolonizing Revelation: A Spatial Reading of the Blues (Fortress Academic, 2018), takes up these realities with regard to the American music genre known as the blues. Burnett’s constructive approach to systematic theology looks to expose the theological insights of people groups that respond to domination through the creative use of cultural production.

Contributions: M. Shawn Copeland
M. Shawn Copeland is a professor of systematic theology at Boston College. An award-winning writer, Copeland is the author and/or editor of six books, including Enfleshing Freedom: Body, Race, and Being (Fortress Press, 2009) and The Subversive Power of Love: The Vision of Henriette Delille (Paulist Press, 2009), and more than 125 articles, book chapters, reviews, and blog entries on spirituality, theological anthropology, political theology, social suffering, gender, and race.

Contributions: Yomaira C. Figueroa
Yomaira C. Figueroa is an assistant professor of Afro-diaspora studies in the Department of English at Michigan State University. Written through the lens of decoloniality, women of color feminisms, and feminist philosophy, her forthcoming book, Decolonizing Diasporas: Radical Mappings of Afro-Atlantic Literature (Northwestern University Press, 2020), examines the textual, historical, and political relations between diasporic/exilic Puerto Rican, Cuban, Dominican, and Equatoguinean poetics. Her published work can be found in Hypatia: A Journal of Feminist Philosophy, Decolonization: Indigeneity, Education & Society, CENTRO: Journal of the Center for Puerto Rican Studies, and SX Salon. A scholar and organizer, she is a founder of the MSU Womxn of Color Initiative and of the collaborative hurricane recovery project #ProyectoPalabrasPR.

Contributions: Kristien Justaert
Kristien Justaert was postdoctoral researcher of systematic theology at Leuven University, Belgium. She is currently the director of an environmental nonprofit organization.

Contributions: Xhercis Méndez
Xhercis Méndez is an assistant professor in women and gender studies at California State University, Fullerton. She is a transdisciplinary scholar-activist whose research focuses on developing decolonial feminist methodologies and practices for building toward transformative justice and expanding our liberatory imaginations. She is the founder of the Transformative Justice Speaker Series and Initiative at Michigan State University and a co-organizer of the collaborative hurricane recovery project #ProyectoPalabrasPR. Her published work includes “Notes toward a Decolonial Feminist Methodology: Revisiting the Race/Gender Matrix” (Trans-Scripts, 2015), “Which Black Lives Matter?: Gender, State-Sanctioned Violence and ‘My Brother’s Keeper’ ” (Radical History Review, 2016), and her forthcoming article “Decolonial Feminist Movidas: A Caribeña Rethinks ‘Privilege,’ the Wages of Gender, and Building Complex Coalitions.” She is currently working on her book project entitled Decolonizing Feminist Methodologies from the Dark Side.

Contributions: Andrew Prevot
Andrew Prevot is an associate professor of systematic theology at Boston College. He is the author of Theology and Race: Black and Womanist Traditions in the United States (Brill, forthcoming) and Thinking Prayer: Theology and Spirituality amid the Crises of Modernity (Notre Dame University Press, 2015). He is the coeditor of Anti-Blackness and Christian Ethics (Orbis, 2017). He has published articles on various aspects of spiritual, philosophical, and political theology in journals such as Horizons, Pro Ecclesia, Spiritus, Heythrop, Tijdschrift voor Theologie, Transversalités, Political Theology, and the Journal of Feminist Studies in Religion.

Mayra Rivera is a professor of religion and Latinx studies at Harvard University. Rivera works at the intersections between continental philosophy of religion, literature, and theories of coloniality, race, and gender—with particular attention to Caribbean postcolonial thought. Her research explores the relationship between discursive and material dimensions in shaping human embodiment. Her most recent book, Poetics of the Flesh (Duke University Press, 2015), analyzes theological, philosophical, and political descriptions of flesh as metaphors for understanding how social discourses
materialize in human bodies. Rivera is currently developing a project that explores narratives of catastrophe in twentieth century Caribbean writing.

Contributions: Linn Marie Tonstad
Linn Marie Tonstad is an associate professor of systematic theology at Yale Divinity School. Her interests include theology, queer and feminist theory, and theory and method in religious studies. She is the author of two books, God and Difference: The Trinity, Sexuality, and the Transformation of Finitude (Routledge, 2016) and Queer Theology: Beyond Apologetics (Cascade, 2018).

Contributions: Alexander Weheliye
Alexander Weheliye is a professor of African American studies at Northwestern University, where he teaches black literature and culture, critical theory, social technologies, and popular culture. He is the author of Phonographies: Grooves in Sonic Afro-Modernity (Duke University Press, 2005) and Habeas Viscus: Racializing Assemblages, Biopolitics, and Black Feminist Theories of the Human (Duke University Press, 2014). Currently, he is working on two projects. The first, Feenin: R & B’s Technologies of Humanity, offers a critical history of the intimate relationship between R & B music and technology since the late 1970s. The second, Black Life/SchwarzSein, situates Blackness as an ungendered ontology of unbelonging.