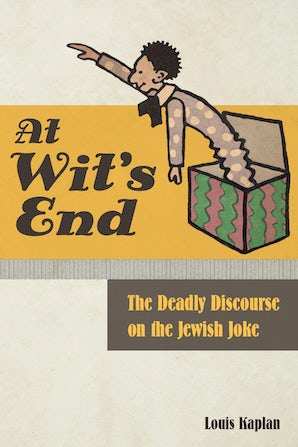 A scholarly and thought-provoking work that places Jewish humor at the center of a discourse about Jewish and German relations through most of the twentieth century.

At Wit’s End explores the fascinating discourse on Jewish wit in the twentieth century when the Jewish joke became the subject of serious humanistic inquiry and inserted itself into the cultural and political debates among Germans and Jews against the ideologically charged backdrop of anti-Semitism, the Jewish question, and the Holocaust.

The first in-depth study to explore the Jewish joke as a crucial rhetorical figure in larger cultural debates in Germany, author Louis Kaplan presents an engrossing and lucid work of scholarship that examines how “der jüdische Witz” (referring to both Jewish wit and jokes) was utilized differently in a number of texts, from the Weimar Republic to the rise of National Socialism, and how it was re-introduced into the public sphere after the Holocaust with the controversial publication of Salcia Landmann’s collection of Jewish jokes in the reparations era (Wiedergutmachung). Kaplan reviews the claims made about the Jewish joke and its provocative laughter by notable writers from a variety of ideological perspectives, demonstrating how their reflections on this complex cultural trope enable a better understanding of German–Jewish intercultural relations and their eventual breakdown in the Third Reich. He also illustrates how selfcritical and self-ironic Jewish Witz maintained a fraught and ambivalent relationship with anti-Semitism.
In reviewing this critical and traumatic moment in modern German–Jewish history through the deadly discourse on the Jewish joke, At Wit’s End includes chapters on the virulent Austrian anti-Semitic racial theorist Arthur Trebitsch, the Nazi racial propagandist Siegfried Kadner, the German Marxist cultural historian Eduard Fuchs, the Jewish diasporic historian Erich Kahler, and the Jewish cabaret impresario Kurt Robitschek, among others. Shedding new light on anti-Semitism and on the Jewish question leading up to the Holocaust, At Wit’s End provides readers with a unique perspective by which to gain important insights about this crucial historical period that reverberates into the present day, when potentially offensive humor coupled with a toxic political climate and xenophobia can have deadly consequences.

Louis Kaplan's marvelous book profoundly probes the deadly seriousness and deep structures of the discourse around the Jewish joke as uttered by various European progenitors, propagandists and analysts, especially in Germany from the Weimar Republic through Nazism and the post-Holocaust period. This is not your usual run-of-the mill book on "Jewish Jokes". Rather, in a uniquely sophisticated manner, Kaplan uncovers the multiple functions, ambiguities and hidden connections between anti-Semitism, Jewish self-conceptions and this slippery and dynamic discourse. I know of no other work that has recognized and so profoundly grasps the deep seriousness of "wit" as it penetrated Jewish and European history. That itself constitutes a major achievement. Added to this is Kaplan's fascinating "Afterword" in which he reflects on "The Jewish Joke in Trump's America" and the ways in which there is a surprising continuity in a discourse which seems to have lost none of its controversial and potentially dangerous relevancy.---Steven Aschheim, Professor Emeritus, The Hebrew University

With insight and incisiveness, a steady hand and a clear eye, Kaplan navigates through the most treacherous of comedic waters - the role of the Jewish joke in Germany through much of the twentieth century and beyond. Jokes have sharp and manifold edges, and Kaplan is a clear and brilliant guide to explaining how they bite as well as bind.---Jeremy Dauber, author, Jewish Comedy: A Serious History

Not a book about Jewish jokes but rather a metacritcal analysis of the discourse on Jewish humor in Germany in
the first half of the 20th century, this insightful and incisive volume ultimately explores the link between Jewish
self-irony and its appropriation in anti-Semitic humor... Highly recommended.

At Wit’s End is valuable reading for any scholar interested in a sophisticated approach to the subject of how the various manifestations of Jewish/ethnic humor can become part of destructive rhetoric. - Studies in American Humor

Kaplan’s book proves that not only are there still new things to be written about Jewish humor, but also that “Jewish humor” as a topic defies easy classification within a specific field or discipline. - Journal of Jewish Identities

In this insightful book, Louis Kaplan shows how important it is to take seriously what societies think about humour... By unpacking essentialising appropriations that denied the inherently unstable character of identity projections, Kaplan impressively shows how the toxic misuse of Jewish wit as a key concept reflected the desire to determine Jewish identity. - Central European History

Introduction: The Joke and Its Questions | 1

2 Of Caricatures, Jokes, and Anti- Semitism: The Case of Eduard Fuchs | 60

3 Of Watchmen and Comedians: Jewish Jokes and Free Speech in Weimar Germany | 95

5 Of Jokes and Propaganda: The Mobilization of the Jewish Joke in the Nazi Era | 153

By (author) Louis Kaplan
Louis Kaplan is professor of Visual Studies and Art History and an affiliated faculty member at the Centre for Jewish Studies at the University of Toronto. He is the author of Photography and Humour; The Strange Case of William Mumler, Spirit Photographer; American Exposures: Photography and Community in the Twentieth Century; and László Moholy- Nagy: Biographical Writings.