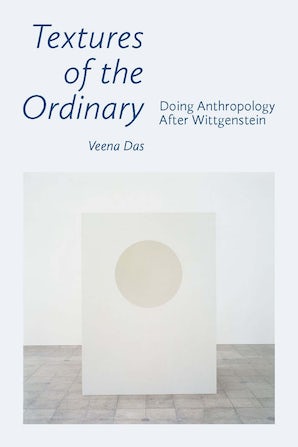 Textures of the Ordinary

How might we speak of human life amid violence, deprivation, or disease so intrusive as to put the idea of the human into question? How can scholarship and advocacy address new forms of war or the slow, corrosive violence that belie democracy's promise to mitigate human suffering? To Veena Das, the answers to these question lie not in foundational ideas about human nature but in a close attention to the diverse ways in which the natural and the social mutually absorb each other on a daily basis.

Textures of the Ordinary shows how anthropology finds a companionship with philosophy in the exploration of everyday life. Based on two decades of ethnographic work among low-income urban families in India, Das shows how the notion of texture aligns ethnography with the anthropological tone in Wittgenstein and Cavell, as well as in literary texts.

Das shows that doing anthropology after Wittgenstein does not consist in taking over a new set of terms such as forms of life, language games, or private language from Wittgenstein’s philosophy. Instead, we must learn to see what eludes us in the everyday precisely because it is before our eyes. The book shows different routes of return to the everyday as it is corroded not only by catastrophic events but also by repetitive and routine violence within everyday life itself. As an alternative to normative ethics, this book develops ordinary ethics as attentiveness to the other and as the ability of small acts of care to stand up to horrific violence.

Textures of the Ordinary offers a model of thinking in which concepts and experience are shown to be mutually vulnerable. With questions returned to repeatedly throughout the text and over a lifetime, this book is an intellectually intimate invitation into the ordinary, that which is most simple yet most difficult to perceive in our lives.

Authors & Distributors
Veena Das is Krieger-Eisenhower Professor of Anthropology and adjunct professor of humanities at the Department of Comparative Thought and Literature at the Johns Hopkins University. Her most recent books are Life and Words: Violence and the Descent into the Ordinary (2007), Affliction: Health, Disease, Poverty (2015), and Four Lectures on Ethics (coauthored, 2015). She has also edited or coedited several books on social suffering, living and dying in the contemporary world, and the relation between philosophy and anthropology. Das is a Fellow of the American Academy of Arts and Sciences, the Academy of Scientists from Developing Societies, and Corresponding Fellow of the British Academy. She has received honorary doctorates from the University of Chicago, University of Edinburgh, University of Bern, and from Durham University. In 2015, she received the Nessim Habib Prize from the University of Geneva.
Reviews

“Not just an elegant discourse on how to manage a conceptual life, this is an engagingly courageous one. Like the everyday that accompanies Das at every step, there is no stopping but in the middle. How refreshing her retellings; how illuminating the new hesitations and new certainties that emerge!”---Marilyn Strathern, University of Cambridge,

“A truly extraordinary work. Das allows the reader to see her thinking in action, as she introduces the reader to each key idea and problem, and then takes the reader ever deeper, layer by layer, into the complex implications that need to be explored. It is one of the most exciting and intellectually probing books I have read in a very, very long time.”---Michael Puett, Harvard University,

“Reading Textures of the Ordinary transforms our vision of life and ethics and reveals how anthropology can claim to become not only “philosophical” (it has always been that) but philosophy itself.”---Sandra Laugier, University of Paris 1 Pantheon–Sorbonne,

2 A Politics of the Ordinary: Action, Expression, and Everyday Life | 58

4 Ethics, Self-Knowledge, and Words Not at Home:
The Ephemeral and the Durable | 120

5 Disorders of Desire or Moral Striving? Engaging the Life of the Other | 148

6 Psychiatric Power, Mental Illness, and the Claim to the Real:
Foucault in the Slums of Delhi | 173

7 The Boundaries of the “We”: Cruelty, Responsibility, and Forms of Life | 198

8 A Child Disappears: Law in the Courts, Law in the Interstices of Everyday Life | 216

9 Of Mistakes, Errors, and Superstition:
Reading Wittgenstein’s Remarks on Frazer | 246

By (author) Veena Das
Veena Das is Krieger-Eisenhower Professor of Anthropology at the Johns Hopkins University.