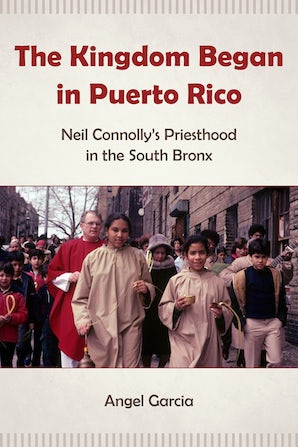 Authors & Distributors
Angel Garcia was a community organizer and Executive Director of South Bronx People for Change, a Church-based direct action and membership organization cofounded by Fr. Connolly. Born in Puerto Rico, and a graduate of Regis High School, Princeton University, and Pace University, Garcia is a long-term resident of the South Bronx and has been active on social justice issues and worker cooperatives.
Reviews

As a deacon and priest in the South Bronx I came to know, respect and admire Fr. Neil Connolly. After reading this book I have come to admire him even more. This biography affords valuable lessons for urban parish community organizers in the United States and for the dialog with the Church in Latin America and the Caribbean.” - Roberto O. González Nieves, OFM, Archbishop of San Juan de Puerto Rico

Angel Garcia’s The Kingdom Began in Puerto Rico highlights the way that a single person, living with cultural humility and a commitment to radical solidarity, can contribute significantly to social justice. This text contributes to our understandings of the intersection between religious faith and community organizing by offering us a vivid case study of the life of Neil Connolly and the South Bronx. - Dr. Emily Welty, Director of Peace and Justice Studies, Pace University

Angel Garcia captures the heart and the leadership of Fr. Neil in his history, The Kingdom Began in Puerto Rico: Neil Connolly’s Priesthood in the South Bronx. Fr. Neil was bigger than life but a humble priest who followed his call to preach the Gospel with an uncanny sense of leadership and community organizing. He carried those gifts that he developed in his work in the South Bronx all the way to the Lower East Side. He believed in the priesthood of the laity and formed people to step up to leadership roles in parish and, in particular, Small Christian Communities, where people shared faith and put it into action. His heart was in the parish but no matter what Fr. Neil was called to do, his wisdom and experience focused on developing leaders in order to effect change for the betterment of all. He was my mentor and friend who shaped my way of ministering in our church and beyond. - Donna L. Ciangio, OP, D.Min.; Chancellor, Archdiocese of Newark; Board Trustee, Caldwell University; Faculty, Ministry Doctoral Program, Drew University; Chairperson, North American Forum for Small Christian Communities

The Puerto Rican migration after the Second World War challenged the Catholic Church of New York. Through the efforts of priests like Fr. Neil Connolly, they and the other Latinos who followed became the heart of that Church in the South Bronx. Campaigns for human dignity and social justice played a large part in that process. Angel Garcia captures the spirit of the era, and the spirit of the man. - James Martin, S.J., author of Jesus: A Pilgrimage and My Life with the Saints

The Puerto Rican migration after the Second World War challenged the New York Catholic Church. Thanks to the efforts of priests like Fr. Neil Connolly, as well as the people themselves, the Church rose to the challenge, with good will and on-going discernment. Conducted with the people, organizing campaigns involving other priests and religious and lay church workers of the South Bronx, many were invited into cooperation, solidarity and spirituality by Fr. Connolly…Angel Garcia captures the spirit of the era, and the spirit of the man. - Fr. James Joyce, S.J., former Director of Social Ministries for the New York Province of the Society of Jesus and the past Chair of the Board of Jesuit Social Ministries.

The Kingdom Began in Puerto Rico is an engaging study of the dedicated and charismatic Irish-American priest of the archdiocese of New York and the vicar of the South Bronx, Father Neil Connolly, who was widely respected, far beyond the confines of his own faith community, for his efforts in the poorest congressional district in the United States. Pope Francis would have been proud of him because he shared Francis’s values and priorities, especially his commitment to the poor. Angel Garcia offers here a valuable introduction to the role of the Catholic Church in the survival and revival of the South Bronx. - Msgr. Thomas J. Shelley, Emeritus Professor of Church History at Fordham University