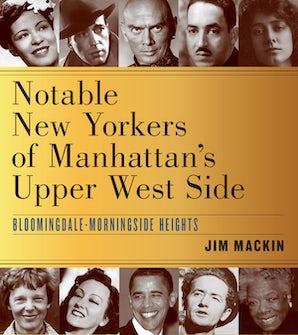 Nearly 600 captivating stories of notable former residents of Manhattan’s Upper West Side, some famous, some forgotten

What do Humphrey Bogart and Patty Hill (co-author of “Happy Birthday,” the most popular song of all time) have in common? Both of them once lived in the neighborhood of Morningside Heights and Bloomingdale, a strip of land that runs from the 90s to 125th Street, between the Hudson River and Central Park. Spanning hundreds of years, Notable New Yorkers of Manhattan’s Upper West Side is a compilation of stories of nearly 600 former residents who once called Manhattan’s Upper West Side home.

Profiling a rare selection of wildly diverse people who shaped the character of the area, author Jim Mackin introduces readers to its fascinating residents—some famous, such as George and Ira Gershwin and Thurgood Marshall, and some forgotten, such as Harriet Brooks, Augustus Meyers, and Elinor Smith. Brief biographies reveal intriguing facts about this group, which include scientists, explorers, historians, journalists, artists, entertainers, aviators, public officials, lawyers, judges, and some in a category too unique to label. This collection also promotes accomplished women who have been forgotten and spotlights The Old Community, a tight-knit African American enclave that included such talented and accomplished residents as Marcus Garvey, Billie Holiday, and Butterfly McQueen.

The book is divided into five geographical sections: the West 90s, the West 100s, the West 110s, the West 120s, and Riverside Drive. Addresses are arranged in ascending order within each section, first by street number and then by street address number. While the focus is on people, the book includes an eclectic collection of interesting facts and colorful stories about the neighborhood itself, including the 9th Avenue El, Little Coney Island, and, notoriously, one of the most dangerous streets in the city, as well as songs and movies that were written and filmed in the neighborhood. Notable New Yorkers of Manhattan’s Upper West Side provides a unique overview of the people who shaped the neighborhood through their presence and serves as a guide to those who deserve to be recognized and remembered.

Authors & Distributors
Jim Mackin is a New York City historian and founder of WeekdayWalks, which provides tours of New York neighborhoods. Jim is co-leader of the Bloomingdale Neighborhood History Group, and he is the recipient of the Mayor’s Award for Volunteer Service and the Morningside Heights Historic District Committee Award for Contributions.
Reviews

If you are in a hurry, don't take Jim Mackin on a walk through the Upper West Side. Every few steps he might stop and say, 'Let me tell you who lived here,' or, 'You'll never guess who worked there.' You see, Mackin has uncovered the homes of every notable figure who has ever resided in the neighborhood--and they are many. But if, like me, you find such revelations delightful and addictive, Mackin--or at least his book--will make a perfect companion. His work is an exhaustive and ofttimes surprising 'Who's Who' of Upper West Siders who have shaped the worlds of art, culture, politics, and science. After reading his book I thought, 'Harlem and Greenwich Village boosters take note! The Upper West Side deserves a seat at the table.' - Michael Miscione, Manhattan Borough Historian, 2006 - 2019

Jim Mackin’s work will add an extra dimension to your enjoyment of this marvelous neighborhood. What fascinating people lived, wrought, wrote, schemed and sang behind those windows we pass every day! - Gilbert Tauber, nycstreets.info

How to Use This Book | xv

What Is Bloomingdale? What Is Morningside Heights? | xix

By (author) Jim Mackin
Jim Mackin is a New York City historian and founder of WeekdayWalks, which provides tours of New York neighborhoods. Jim is co-leader of the Bloomingdale Neighborhood History Group, and he is the recipient of the Mayor’s Award for Volunteer Service and the Morningside Heights Historic District Committee Award for Contributions.