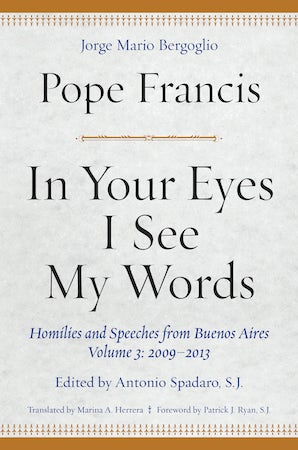 In Your Eyes I See My Words, Volume 3 brings together the homilies and speeches of Archbishop Cardinal Jorge Mario Bergoglio from 2009 through his election as Pope Francis on March 13, 2013. Taken together, all three volumes present with remarkable clarity his theological, educational, and pastoral vision for the Church that was shaped far from Europe and North America, and in the tumultuous years of Argentina’s political and economic struggles. These writings provide an intimate glimpse into the theological, philosophical, scientific, and cultural-educational currents that forged the steady, loving, and nurturing hands with which Bergoglio guided the Church in Buenos Aires. Those very same hands have now done the same for the Church from Rome, a Church rocked by financial and moral scandals, and a world shaken by the first global pandemic in a century.

No pope in modern times has compiled such a rich variety of writings in as many fields as Bergoglio has done for us in the years prior to his election to the papacy, especially during his time as Archbishop/Cardinal of Buenos Aires. These writings were kneaded—a word he uses when talking about the work of molding the souls and character of youth and seminarians—in the relationships he formed in his bus rides to work and in his intense contact with all segments of the population. Because of that careful and prayerful process of kneading they have found their full development in Bergoglio’s writing as Pope Francis, especially in Evangelii gaudium (November 2013); Gaudete et exsultate, On the call to sanctity (March 2018); and his encyclical Laudato si’ (May 2015). In this final volume of Bergoglio’s homilies and papers we meet European theologians and thinkers such as Hans Urs von Balthasar, Henri de Lubac, and Bergoglio’s Uruguayan philosopher and friend, Methol Ferré, the literary figure Miguel Ángel Asturias, and Enrique Santos Discépolo, a singer and composer of tangos that decry corruption.

In Your Eyes I See My Words, Volume 3 concludes with a homily Bergoglio prepared before leaving for Rome to attend the conclave that elected him to the papacy. It was for the Chrism Mass on Holy Thursday, to be delivered to his priests in Buenos Aires. Instead, it was his homily from Rome to the priests of the world reminding them, “The precious oil that anoints Aaron’s beard not only perfumes his person but spreads and reaches the margins. The Lord will say it clearly: his anointing is for the poor, the prisoners, the sick, those who are sad and alone.” Here, as Cardinal Jorge Mario Bergoglio became Pope Francis, he spoke words of deep tenderness, reminding all of us that the Lord’s anointing is meant precisely for those who are floundering—those who are sick, who are sad or alone, who are in need of care. In short, the Lord’s anointing is meant for the world we live in today, at this exact moment of crisis. In a prophetic conclusion, the last homily of this volume is an outline of the roadmap Pope Francis has followed throughout his papacy: one defined by ongoing love and care for God’s people and that seeks to spread God’s anointing to those living on the margins of life.

Authors & Distributors
Pope Francis (Author)
Pope Francis was born in Flores, Buenos Aires, Argentina, on December 17, 1936, entered the Society of Jesus at age twenty-one, and was ordained in 1969 with a degree in philosophy. He became auxiliary bishop of Buenos Aires in 1992, archbishop in 1998, and cardinal in 2001. He was elected as the first Jesuit pope on March 13, 2013.

In this third and final collection of the homilies and talks of Cardinal Bergoglio, we can already recognize the phoenix of Pope Francis rising up from the ashes of the Archbishop of Buenos Aires. - Patrick J. Ryan, S.J., from the foreword 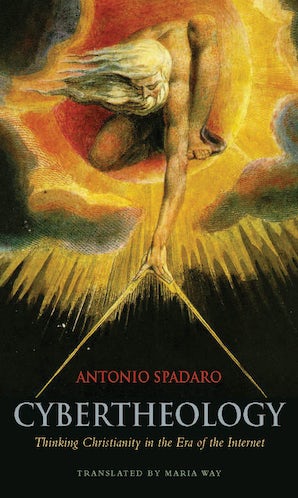